Under the radar or beneath notice: Rafael M. Leon new Landmarks Commission Chairman 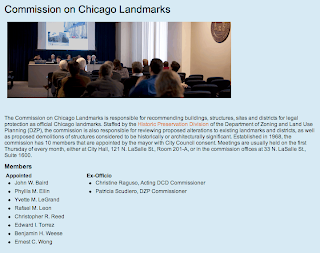 There's not a lot of information on the internet about Leon.  In July, Mayor Daley reappointed Leon as a member of the Chicago Development Fund Advisory Board.  Previously, he's been a member of the city's Community Development Commission, being reappointed in July but no longer listed as a member.  The long-time Edgewater resident was also a small contributor to the Mayor's last re-election campaign.  According to its website, the CHMDC "was created in 1982 to help finance the construction and rehabilitation of apartments for Chicago's low-income resident," and has invested more than $46 million in 525 units in 30 buildings over the last nine years.  It was the co-developer of The Mark in Buena Park,  described as a "luxury condominium complex" that also offers affordable housing. 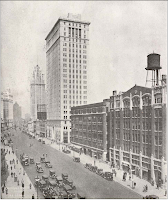 When I wrote in my post from yesterday of "the useless Commission",  I was not referring to the staff, which is hard-working, brilliantly knowledgeable and dedicated.  You can see it in the superb report they created for the recent landmarking of the Old Republic Building on North Michigan, a splendid document informatively written and beautifully illustrated, creating a fascinating history both of the building and its times. 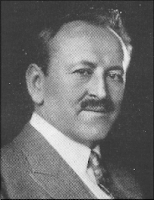 It also includes a great, much needed biography of architects Karl Vitzthum and John J. Burns, largely forgotten today, but who created not only the Old Republic, but such Chicago landmarks (designated or not)  as One North LaSalle,  the Home Bank at Ashland and Milwaukee, and the Painters District Council 14. 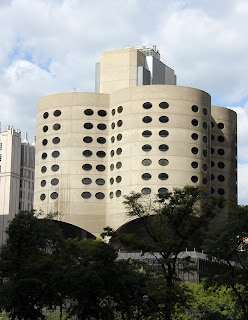 The actual Landmarks Commission is another story, a body of members appointed by the mayor less for their usually blue chip professional and civic credentials than for their dependability as a rubber stamp.  When preservation groups and 42nd ward alderman Brendan Reilly were fighting to save Jarvis Hunt's 1924 Lake Shore Athletic Club from being demolished for still another mediocre Lucien Lagrange hi-rise, the Commission was MIA.  When the Mayor recklessly demolished the Bauhaus-inspired buildings, designed with the collaboration of Walter Gropius, at Michael Reese Hospital, the Commission did nothing.  And to date it's doing nothing to step in and protect Bertrand Goldberg's Prentice Hospital, now seriously endangered.  The Commission is good at pushing through the paperwork, but it's all see no evil, hear no evil, speak no evil whenever those seeking to destroy Chicago's architectural legacy happen to also be powerful interests like the mayor, Northwestern, or a clouted developer.


The Commission still hasn't gotten around to giving such essential Chicago architectural icons as the Wrigley Building or Marina City landmark preservation, 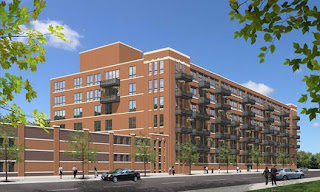 but they've got time to give landmark designation to a 1942, six-story Art Moderne former Spiegel Administration Building at 1038 W. 35th street to try to help a developer resuscitate a troubled project to convert it to housing that's been dead in the water since 2006.  As noted by the Curbed Chicago website, will the Commission now prevent Dubin Residential from obliterating the building's most distinctive feature - continuous strips of tall windows, separated only by narrow brick mullions - with the peppering of black railed balconies showed in this rendering?  Meanwhile,  the 1893 Newberry Library and 1929 Daily News Building and plaza still have no landmark protection.