Robots take over - from diapers.com to Helmut Jahn's Mansueto at the U of C


October 7, 2010 - Business Week cover story:  What Amazon Fears Most: Diapers - a story on how roving,  merchandise-picking robots have let diapers.com drive down costs and beat Amazon at its own game.


And if Amazon wanted a diaper war, an all-out price and delivery-time smackdown? "I would like that," said Bharara. "I would definitely take that challenge."

November 5, 2010 - Business Insider - Amazon Nukes Diapers.com in Price War on how Amazon is selling diapers below cost to counter diapers.com. (Microsoft vs. Netscape, anyone?)
November 6, 2010 - Amazon to Acquire Diapers.com for $540 million - ah, the joys of predatory capitalism. 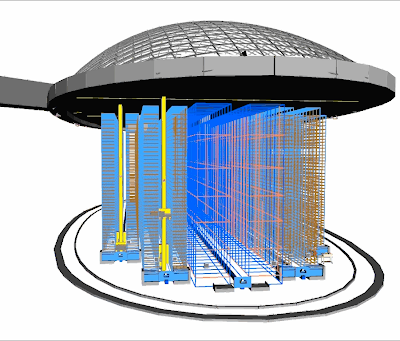 click images for larger view
The University of Chicago's new Mansueto Library, designed by Helmut Jahn and currently under construction with a Fall, 2011 completion date, is going a similar route, having hiring Milwaukee's HK Systems to deploy an Automated Storage and Retrieval System (ASRS) to create a state-of-the-art Automated Library System (ALS). 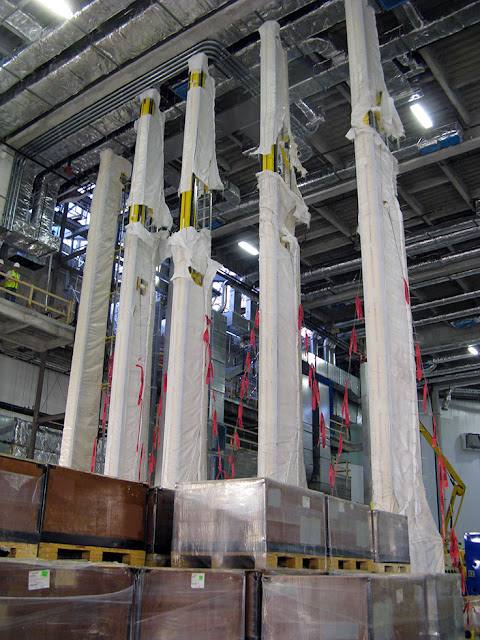 The soaring cranes you see here under wraps will automatically retrieve requests from the 3,500,000 volumes kept in a forest of soaring, untouched-by-human-hands stacks filling the huge, 50 foot deep bunker beneath the reading room under Jahn and Werner Sobek's massive glass dome shaped like the world's largest contact lens. 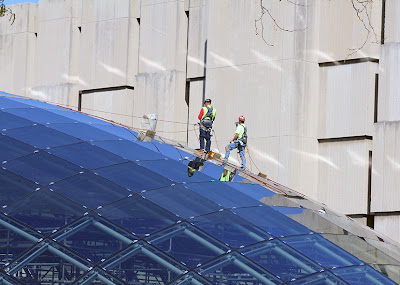 You can view a slow-loading video of how it works here.

The Library of Congress is denying reports that it is responding by developing an even faster, more advanced system, based on state-of-the-art teleportation technology from Star Trek Industries, which will allow readers to obtain a book just by thinking about it, enabling the LoC to outperform the Mansueto's delivery times by several minutes to a week and squeeze them out of the entire high-end storehouse of knowledge market.

We hope to writing a lot more about the Mansueto later. For now, there's a video of a great tour we took this past summer with Senior Project Manager Mike Natarus.

It's an interesting concept for a library, but as a book lover (and architecture lover), I find it a rather inhumane approach to interacting with books. Part of the joy of a library is wandering the stacks and occasionally finding books accidentally (which is impossible in this system).

[1] I'm told by a librarian at the U. of. C. that the contents of the Mansueto Library will be bound journals, the browsing of which produces no epiphanies. (I really dig the dome of the Mansueto library.)

[2] I also understand that the new hospital at Rush uses robots to deliver things from its underground loading dock to the various destinations over several blocks. If so, very cool. (I really dig the new hospital buildings, designed by Perkins and Will.)

As a research library, where you need to find a specific book for a paper or a project or some kind of specific research, this is incredible.

Professional traders have long relied on automated picking robots to guide their own trading work within the major trading houses. This technology works by taking the full scope of the market into account in identifying well performing breakout stock performances of the past.

I loved this one. It has given me courage to try scarier things. I tend to steer clear of them but not anymore.