Geoffrey Goldberg on the 50th anniversary of Marina City groundbreaking 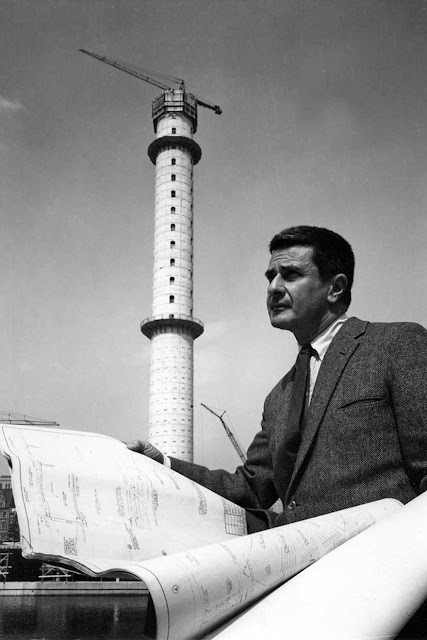 click images for larger view
On November 22, 1960, in a ceremony attended by Mayor Richard J. Daley, ground was broken on Chicago's Block 1, on north bank of the river between State and Dearborn, for what would become an icon famous throughout the world:  architect Bertrand Goldberg's Marina City, a pioneering mixed used complex that brought residential living back to the center city, and coupled it with an office building, a theatre, shops, restaurants and a skating rink.  There had been nothing quite like it before - or since.

Monday, the Portland Cement Associationn marked the 50th anniversary of that event with a press conference featuring Geoffrey Goldberg, an architect, critic and educator in his own right, talking about his father's achievement in creating Marina City, "a place where everyday folks could have fancy architecture."
The design, of course, created a sensation, including a 1962 Jim Beam gift decanter modeled after the Marina City's twin towers, united with a single roof with easy-pour spout.

Afterwards, Goldberg also discussed photographs of much of his father's other work, including the gravely endangered Prentice Hospital.  Especially poignant was a final group photo of the employees of Bertrand Goldberg's Marina City office just before the firm was evicted by a landlord would soon leave the commercial part of the complex as, essentially, an abandoned building.  "We were asked to leave."

That office building is now the Hotel Sax, where as a part of the Monday press conference, a restored version of a fascinating 1965 Portland Cement Association documentary about the building of Marina City was unveiled.  We've written about this before.  The current restoration is far from pristine - the images still a bit unfocused, the colors subdued - but its still a visible improvement from the previous version. 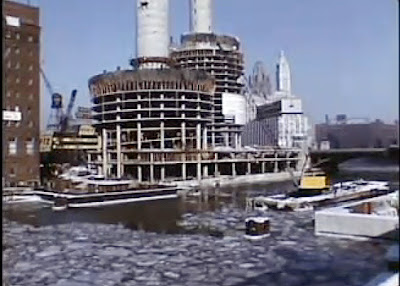 More importantly, it's a spectacular photographic record of Chicago in the early 1960's, when River North, still described as a derelict district, was dominated by surface parking lots, massive cold storage warehouses along the river, and one of the city's Skid Rows to the north.  It is, to a large degree, a lost world, a forgotten interstitial link between Chicago's legendary industrial past and uncertain post-industrial future. 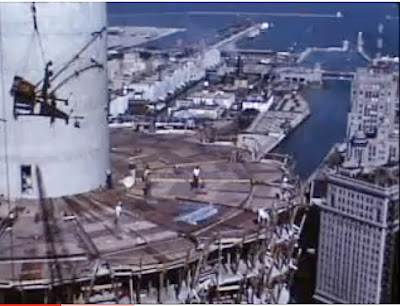 Steven Dahlman's indispensable Marina City Online website has the entire documentary, in two parts, along with an encyclopedic collection of information, drawings and photographs on the origins, creation, and history of Marina City.  We include part two below.
Even after fifty years, Marina City has not lost its capacity to thrill.  As Geoffrey Goldberg said on Monday, "When built it was an inspiration, and it remains one today.  It was then, and still is, essentially, an optimistic place."  In this day of strip malls and big box warehouses, of cheap and dispiriting condo towers, would that there would be a few more of its kind today.

I remember overhearing two kids talking. One pointed out Marina City to the other. "What's that?" asked the other. "It's where the Marines live," said the first.