The url of the new Chicago Theological Seminary Documentation website,  www.CTSthreatened.org, reflects concerns that the 1920's buildings designed by Herbert Riddle on the University of Chicago campus in Hyde Park will undergo major alterations when they are renovated as the new home for the recently formed Milton Friedman Institute for Research in Economics.  Ann Beha Architects is partnering with Gensler on the project.  The University of Chicago paid $44 million to purchase the buildings from  the 153-year--old CTS, which is constructing a new four-story, 75,000-square-foot facility, designed by Nagle, Hatray, Danker, Kagan, McKay Penney, across the Midway Plaisance at Dorchester and 60th.

According to a report on the Hyde Park-Kenwood Community Conference website, 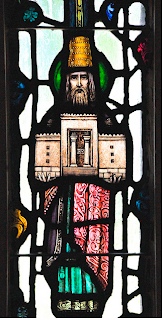 The crux is that by pre-agreement between the University and CTS a goodly proportion of stained glass windows and some other artifacts will move to the new seminary or otherwise be taken out (future undetermined) and not used in the totally repurposed chapels. Historic areas will be respected, other parts will be redone within old masonry and some new construction for mechanicals, circulation, or a lecture hall will be created (not going outside the CTS footprint). Seminary Co-op Bookstore goes into new ample space (including reading space and a student-run cafe) in McGiffert Hall on Woodlawn. 58th Street will become more a connector, perhaps entirely pedestrian. Cost has not been determined and will not be until Beha architects are further into the design-- they have been researching and considering, including the real and size needs of the new uses. Some glass removal will start soon, full construction in 2012. the next public meeting will be after design process.

The Chicago Theological Seminary was also the entity that acquired Frank Lloyd Wright's Robie House and eventually announced their intention to tear it down "We are in the business to educate ministers, not to support a national shrine", was the comment of the seminary's business manager, as quoted in Jay Pridmore's excellent, The University of Chicago: An Architectural Tour. Robie House became the focus of one the earliest Chicago preservation battles, with Wright, himself, branding the proposed demolition a "special species of vandalism . . . a religious organization has no sense of beauty. You can't expect much from them." 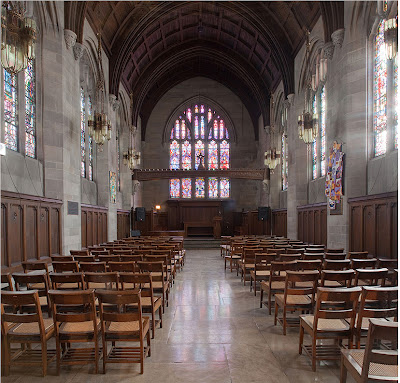 The 180-foot high, 160-square-foot carillon tower was named after Chicago Daily News publisher Victor Lawson, who left the CTS $3.3 million at his death.  According to Pridmore,


The design is reminiscent of the parish church tower of Boston Stump (1520) in Esssex County, England. Closer to the ground, a graceful cloister has stones from religious sites around the world embedded in the wall. The chapel's windows are patterned after the stained glass in Chartres Cathedral.

Reports that the emptied chapel windows will be replaced by new stained glass depicting more contemporarily observant religious events, such as Milton Friedman bestowing "The Miracle of Chile" and F.A. Hayek freeing the serfs from their Social Security checks, remain unconfirmed.