Through November and December, the Chicago Architecture Foundation is offering free shipping on orders of $50.00 or more to locations in the continental U.S.

The on-line bookshop still offers only a small fraction of the titles available in CAF's great Michigan Avenue store, but it does include such items as the new Blair Kamin compilation, Terror & Wonder, and two of the season's "must-have" titles for any architecture buff: Robert Bruegmann and Kathleen Murphy Skolnick's The Architecture of Harry Weese, and the landmark The Complete Architecture of Alder and Sullivan. You can also get your copy of the just released DVD of Mark Richard Smith's documentary Louis Sullivan: the Struggle for American Architecture.

Among the many special items is the Emerson House, a "modern dollhouse" which "draws inspiration from Richard Neutra's Desert House and A. Quincy Jones' house for Gary Cooper" 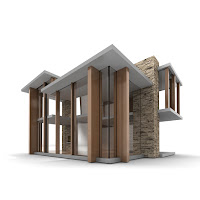 The Emerson House modern dollhouse is the perfect home for the modern family. The modern home has six rooms including a living room, kitchen, library/office, master bedroom, bathroom and child's bedroom. With its large, open floor plan and floor-to-ceiling windows, the Emerson House enjoys year-round sunlight. The modern dollhouse features many extras including mitered-glass corners, two fireplaces, sliding glass doors, solar panels, and recessed LED lights. Finally, the dollhouse is easy on the environment with only non-toxic and lead-free wood stains and paints.

And if that price is a bit too rich for your blood . . . I'm not sure the actual product will be able to live up to the hype, and we won't know until it's released December 3rd, but you could have your own version of CAF's terrific Chicago Model City exhibition with the 831-piece jigsaw puzzle 4D Cityscape Chicago. 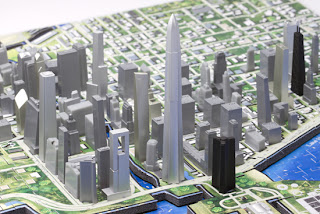 The kicker on this one is that once you've figured out the puzzle, you'll find pre-cut holes for 127 plastic models (included) of buildings "that depict the city as it appeared as far back as 1873 through to 2015 Including icons such as the Willis Tower, John Hancock, and Navy Pier." You could borrow your favorite building to use as your personal Monopoly piece. Among the pieces are a couple of key unbuilt projects, and at $44.95 ($40.46 for CAF members) it may turn out to be the only version of the Santiago Calatrava designed Chicago Spire that developer Garrett Kelleher will ever be able to afford.  Did I mention the streets are claimed to glow in the dark? Unless this thing is a complete dud, this could be the Chicago architectural toy to have this year.

No word yet whether The Frank Lloyd Wright Illustrated Guide to Matrimony will be in stock in time for Christmas. Check out all the great stuff at the CAF store here.