Great Moments in Marketing: The Story of Three on a Match

As I write this, the indispensable TMC is showing a forgotten 1932 film, The Match King, a fictionalized but tasty account of Swedish industrialist Ivar Kreuger. who in the 1920's created a worldwide near-monopoly in the production of matches.  The movie debuted less than 10 months after Kreuger put a bullet through his head in his Berlin apartment.  In the Warner Brothers version, Kreuger somehow starts his career as part of a maintenance crew at Wrigley Field.  (I'm not making this up, you know.) 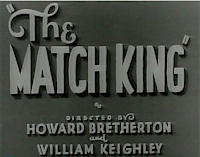 Matches?  Really?  The first question likely to strike you is not how anyone could create such a monopoly, but on what planet could it ever be conceived as worth doing.  In fact Paul Kroll, as Kreuger is named in the film, has a evangelistic speech about the Promethean centrality of matches to all civilized life at the early part of the 20th century, a time before lighters, charcoal starters, nuclear fission and $10.00 a pack cigarettes with scary pictures on their wrapper.  Matches were as logical a place to build an immense fortune as tulips, beanie babies or Facebook.

Kreuger was a brilliant entrepreneur, who created the idea of A & B classes of stock, with the larger B class receiving the usual lush dividends, but control of a corporation being kept tightly in the hands of holders of the comparatively tiny pool of A shares.  He pioneered the use of convertible debentures which, in exchange for regular dividends and the right to convert the debentures into shares of stock if that stock's value soared, were unsecured by any tangible asset.

He was also a gambler and a crook.  In the words of no less than John Kenneth Galbraith:


Boiler-room operators, peddlers of stocks in the imaginary Canadian mines, mutual-fund managers whose genius and imagination are unconstrained by integrity, as well as less exotic larcenists, should read about Kreuger. He was the Leonardo of their craft.

Kreuger deployed dummy corporations, stock manipulation and good old Ponzi schemes to keep his increasingly shaky enterprises barrelling forward.  The 1929 crash sent his empire reeling, and by 1932, the furies circled him, depicted in a rather wonderful montage in the film.  "I have made such a mess of things that I believe this to be the most satisfactory solution for everybody concerned," he wrote - strangely, in English - just before the aforementioned suicidal incident.  As the epitath of the Warner's film has it: "He began in the gutter.  He rose until he ruled the world.  And then he died in the gutter."

Kreuger used a superstition that held sway among soldiers from the Crimean to First World War to bolster the purchase of his matches worldwide.  The story of Three on a Match was that if the same match was used to light cigarettes of three different soldiers, keeping the light alive would give an enemy sniper enough time to zero in  and kill the soldier unlucky enough to be the third using the match.  Even with the far larger number of consumers whose closest encounter with a trench was the gutter in the street outside their apartment, the superstition proved a marvelous incentive for getting them to use an individual match no more than twice before reaching into the box for another - and emptying those boxes much more quickly. 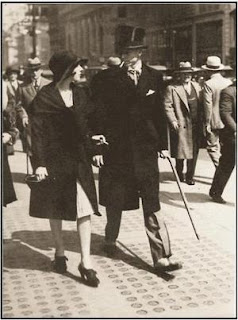 Except, of course, there was no superstition.  Krueger made it all up in the 1920's.  To sell matches.  Successfully.

At about the same time in America, brilliant public relations pioneer Edward Bernays, who learned all about human behavior from his uncle Sigmund Freud, advanced the interests of his tobacco company clients by promoting the new idea of decent women taking up smoking as an expression of liberation, creating irresistible photo-ops of New York fashion models marching in the city's Easter Parade puffing on "Torches of Liberty."  (In the 1960's, Bernays also pioneered campaigns warning of the dangers of smoking.)

We tend of think of mythology as some dusty thing involving archaic Gods and Goddesses.  No: mythology is remade and renewed every moment of every day.  It continues to provide the framework that allows us to understand the world and our place in it.

Our increasingly inclusive, relentlessly interconnected world means that contemporary life is shaped by a burgeoning profusion of fresh myths, virtualized derivatives at ever farther remove from direct experience, that continue to be created as fast as TMZ , Washington spin doctors and gifted social media content creators can churn them out.  The story may be true or fabricated, the purpose clear or veiled.  The myth endures.  And as throughout time, the most powerful are those that establish sympathetic resonance with our primal fears, aspirations and desires.