The 9/11 memorial that disappears after tomorrow 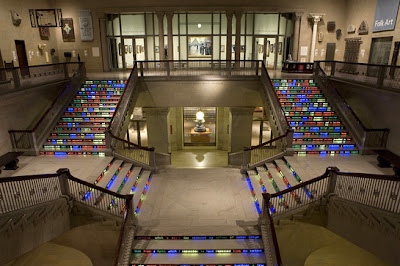 click images for larger view.  photograph courtesy of The Art Institute of Chicago

Sectarianism, bigotry, and its horrible descendant, fanaticism, have long possessed this beautiful earth. They have filled the earth with violence, drenched it often and often with human blood, destroyed civilization and sent whole nations to despair. Had it not been for these horrible demons, human society would be far more advanced than it is now. But their time is come; and I fervently hope that the bell that tolled this morning in honor of this convention may be the death-knell of all fanaticism, of all persecutions with the sword or with the pen, and of all uncharitable feelings between persons wending their way to the same goal - Swami Vivekananda, Chicago, September 11, 1893

Tomorrow is the 10th anniversary of the 9/11, when the twin towers of New York's World Trade Center were destroyed after being hit by jet airplanes hijacked the terrorists.  The day will be filled with solemn observances worldwide, at the new Michael Arad memorial at Ground Zero, and at other memorials to the tragedy in other locations.

One of the most eloquent memorials to 9/11, however, will disappear after tomorrow.  Jitish Kallat's Public Notice 3, on the great stair of the Art Institute of Chicago, goes, not forward from 9/11,but  back over a century, to September 11, 1893, when Swami Vivekananda addressed the Parliament of the World's Religions, held in conjunction with the World's Columbian Exposition, in an auditorium constructed in the Art Institute building, in a space rebuilt into galleries long ago.

While the memorials to 9/11 are about loss, the constructions arising out of 9/11 are mostly about fear.  At Ground Zero, a 1776-foot-tall "Freedom Tower" continues to rise whose base is a 186-foot-tall, windowless concrete bunker, ostensibly to thwart would-be future terrorists by withstanding the strongest truck bomb.  SOM architect David Childs' proposal to distract onlookers from the bunker's oppressive message was to cover it with mirrors, 2,000 prismatic glass panels, like a gigantic disco ball, meaningless glitter covering an iron fist.  But when the glass broke and bowed during the initial installation earlier this year, the concept was abandoned.  And while billions is being spent to make Freedom Tower a fortress impregnable to terrorists, right next door Maki and Associates 72-story Four World Trade Center offers up a completely open, glassed-in entrance floor.  Apparently, the assumption is that terrorists would simply overlook such tempting, more vulnerable targets as Four World Trade or the bird-like Santiago Calatrava transit center nearby.

What Freedom Tower memorializes is not American resolve but paranoia and crippling fear.  Largely, the architectural responses to 9/11 have been less realistic responses than an often irrational pandering to that fear.  Visitors to the Capitol Visitor in Washington are now channeled like rats through a $600 million underground bunker that looks like it was designed by Albert Speer.  The Trib's Blair Kamin wrote this week on how the same mindset has blighted such areas as Union Station, Mies' Federal Center and Pei Cobb's Hyatt Center on Wacker.  At the height of post 9/11 trauma, Architect Carol Ross Barney proved that security can be addressed with exceptional humane design in her for the 2004 federal building that replaced the Alfred P. Murrah building destroyed by a domestic terrorist truck bomb in 1995 that killed 168 people.  Would that more had followed her example.

Instead we get bunkers and bollards, metal detectors and strip searching grandmothers.  And words.  A torrent of words pouring through the media this week on the 10th anniversary of 9/11.  Including, I'm afraid, these of my own. 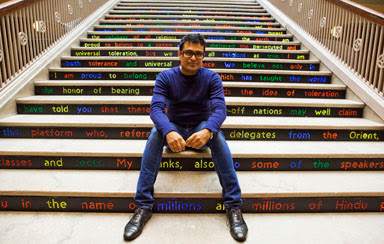 None, however, will be more powerful that those of Kallat's Public Notice 3 at the Art Institute.  Kallat has covered the risers of the museum's great stair with strips of LED's, alternating in the colors of Homeland Security's threat coding system, bearing the words of Swami Vivekananda's 1893 speech.  Like Childs' prism glass, those words shine brightly.  Which path is more likely to lead us to a happier, more secure future? 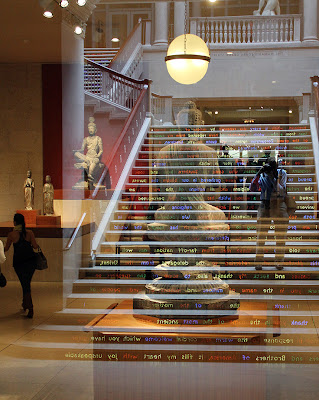 Public Notice 3 is scheduled to be taken down after tomorrow, Sunday, September 11th.  Read our original story about the artwork, and the 1893 Parliament of Religions in Chicago's Art Institute, here.