To put it in perspective, construction on the 1161-foot-tall Trump Tower was started about the same time, and they managed to finish it over two years ago. The new home for the Museum of Broadcast Communications hasn't been so lucky.  This is what they started out with, way back in 2005 . . . 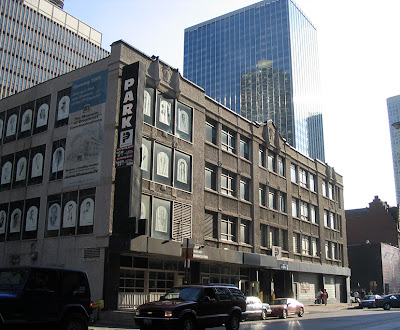 click images for larger view
. . . a rather forlorn-looking parking garage at the corner of Kinzie and State, which within a year or so, was supposed to be transformed into this . . .

. . . a sparkling, 70,000 square-foot, $21 million facility designed by Eckenhoff Saunders Architects in partnership with sustainable design architect Helen Kessler.  And for a while, things went swimmingly.  The steel frame for the new State Street facade went up later that year . . . 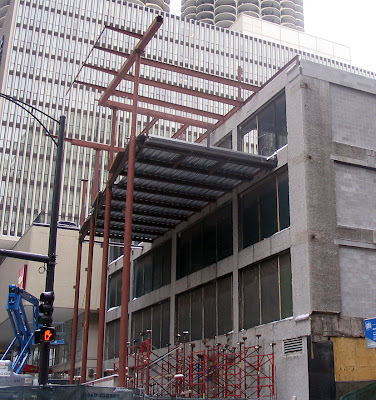 . . . and the following March, the glazing was mounted into the frame.  (See more pictures of this here.) 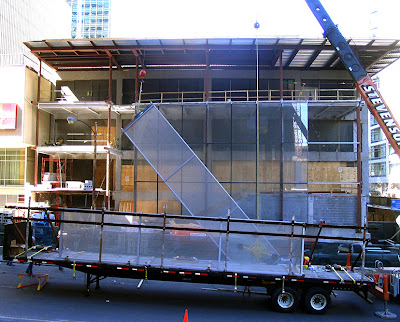 Then, a funny thing happened on the way to the Museum, in the person of  loon Illinois governor Rod Blagojevich promising $6 million for the the project, and then never coming through with the money. Fund-raising dried up.  So, shortly after the curtain wall went up, construction stopped, and the structure was left as an unfinished hulk. 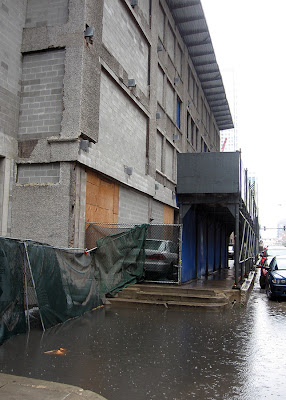 At one point, the contractor, Pepper Construction, claimed there were $4.5 million in unpaid bills.  Then in 2010, Illinois governor Pat Quinn came through with the originally promised $6 million, and construction resumed. 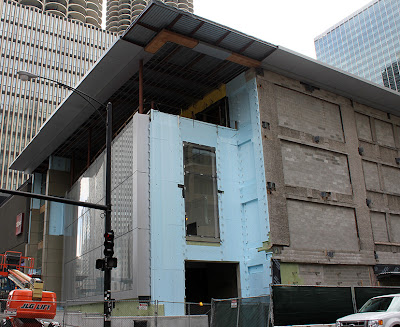 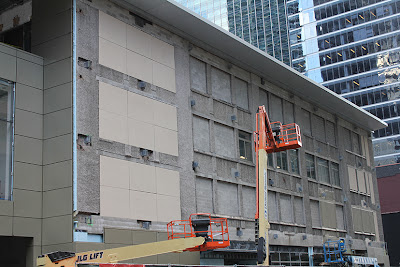 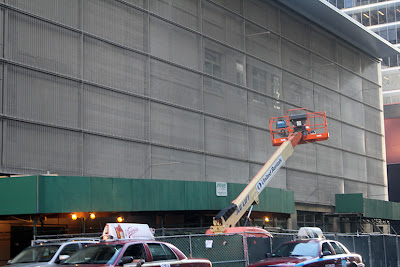 In June of this year, there was a "Sneak Preview" of the new building, complete with a red carpet entrance of  Bozo and Svengoolie, and the hope is now to get the thing opened in time for the Museum's 25th anniversary next year.  We'll see.  But even now, especially on the Kinzie street side, it's a fairly handsome transformation. 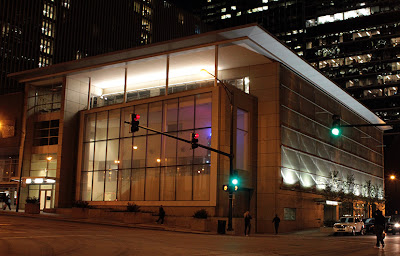 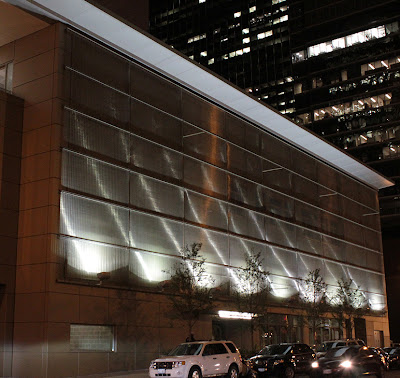 So they actually retained the original parking garage structure, underneath? Pretty astounding, given Chicago's tear-it-down-and-build-from-scratch ethos.

Blago may be a 'loon', but Bruce DuMont is a piece of work too. This was published on the Chicago Reader's web site on 11/17/09:

Persistence may yet pay off for beleaguered Museum of Broadcast Communications head Bruce DuMont: he says both houses of the state legislature have approved a $6 million Capital Development Fund grant that'll permit construction to resume on MBC's State Street building (at Kinzie).

DuMont says the measure now awaits only Governor Pat Quinn's signature; once the money's in hand, "we'll start construction within three weeks." The $6 million is half of what Dumont was thinking MBC had been promised by the state when we first reported that he'd run out of funds in 2006; work has been stalled on the project since then.

Two days later on 11/19/09 Kevin Fuller was arrested at Dumont's house in Oak Park for distributing child pornography online from there:

The 1,500-square-foot house at 1000 N. Taylor is owned by Chicago radio personality Bruce DuMont, who is president and CEO of Chicago's Museum of Broadcast Communications. Neighbors and public records indicate Fuller has lived at the address since 2003.

The men appear to have known each other since at least 1997. A newspaper article from that year in Fuller's hometown paper in Rockmart, Ga., notes that Fuller met President Bill Clinton at a Museum of Broadcast Communications fundraiser at the Chicago Cultural Center, and quotes DuMont. On the museum's Web site Friday, Fuller appeared in two photos, one at May 2009 banquet and another with the caption "MBC staff, volunteers and Junior Board." Those images have since been removed.

There was no answer at the door of DuMont's house Friday morning. DuMont has not returned phone messages left with his secretary or replied to e-mails.

That story didn't travel far outside of OP. Don't know why but there was $6 million on the line for Bruce and his 'legacy', sooooo..... I bet he was relieved the arrest of his, uh, 'roommate' didn't happen one year earlier when gay rights groups were protesting super-anti-gay Focus on the Family's induction into the Radio Hall of Fame. Bruce was chairman of the Radio Hall of Fame in 2008 - it's part of the MBC.

Quinn gave the MBC $6 million after Bruce said 240,000 people would visit the MBC in it's first year on State St. Only 7,000 people visited that year. Maybe Blago knew what he was doing after all. Should've gotten that $6M promise in writing, Bruce!