Herringbone floods and the hidden potential of an overlooked Chicago gem

A couple of year's ago, Hyde Park's Sam Guard had tipped me off about an impending change at the upper-level outdoor plaza at Illinois Center. The basic plan for Illinois Center had been designed by Mies van der Rohe, as well as the first building, One Illinois Center, completed in 1970, the year after Mies' death. The paving design followed the grid of the buildings . . . 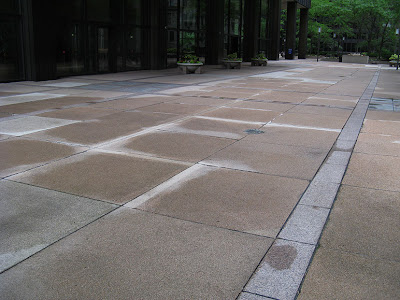 click images for larger view
and, as you can see, it had been allowed to deteriorate over time.  Add to the mix that moisture was reported to be seeping into the level below, required a resurfacing of the plaza. At the time I was talking with Sam Guard, the new plan had already become visible in the driveways, resurfaced in a darker, simpler interlocking pattern of squares and rectangles . . . 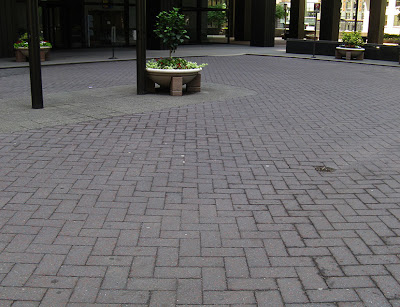 I didn't get much a response when I asked Illinois Center about their plans in 2009.  Nothing seemed to be happening, so I moved on to other things, but a recent visit revealed that it's now the plaza's turn.  The original geometric paving is being replaced by a continuous carpet of herringbone, with lighter pavers of exposed-aggregate Chicago-style concrete . . . 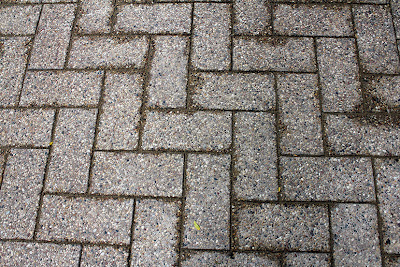 It's not a tragedy, but it's certainly a disconnect from the design of the buildings.  As I've written before in regards to Buckingham Fountain, I'm not a fan of these massive undifferentiated carpets.  What might be distinctive in smaller implementations, or as a composite in a more detailed general design, becomes numbingly generic when slathered across a huge surface like ketchup on a bad burger.  It may be cheaper to maintain, but it's just plain lazy.  At the Miesian Illinois Center, the endless herringbone is like wearing sneakers with black tie. I know it's done, but that doesn't necessarily make it a good idea.

Which is too bad, because in my mind, the upper plaza at Illinois Center is one of Chicago's unrealized gems.  It's been described as cramped and windswept, but I don't find it cramped at all, nor, whenever I visit, especially windswept.  It may not be the greatest place to be on a freezing winter day, but the same could be said for just about any downtown plaza under those conditions.  On a warmer day,  and especially at night, the way you see the buildings slide past each other as you traverse the plaza is quite beautiful. 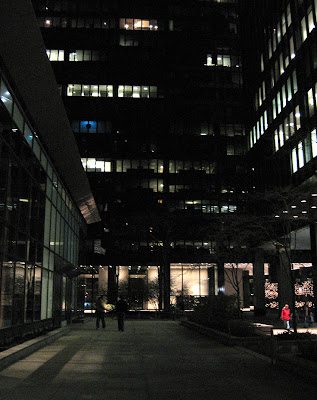 I love the way the plaza plays off the modernist towers to the east and south to a shear western wall made up of the raw backsides of the older Michigan avenue structures.  The mature landscaping is also quite attractive, small plantings, flowers.  I love especially the tall trees, delicate green leaves and brown trunks rising in counterpoint to synthetic black of the monolithic towers. 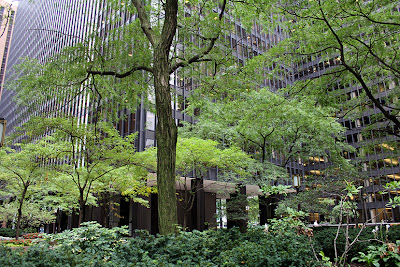 Illinois Center, of course, became the poster child for the revolt against modernism, its towers the epitome of the repetitive black box, it's concourse a low-ceiling second tier shopping mall with the charm stripped away.  It didn't help that the complex was twice removed from the rest of the city, both stuck behind older structures like the Art Deco 333 North Michigan and the neo-classical Republic Insurance Building, and its office lobby's raised up a level above Michigan Avenue.

That raised plaza, however, has now become the bridge to the massive residential development to the east.  Until you get to the sunken park of Lake Shore East, it's all on the same level of the Illinois Center plaza.

Two things are missing to make the plaza a real asset. First off, the kind of amenities that make a plaza a destination.  Changing this needn't be an ordeal  A few kiosks, and maybe a discreet dumbwaiter structure that would allow the broad expanse overlooking the Chicago river . . . 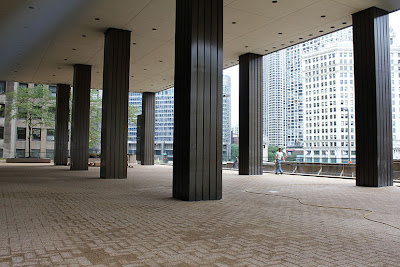 to become a dining plaza during the warmer months.

The second is a way to end Illinois Center's isolation from the Mag Mile, a link to draw up people from Michigan Avenue. In 2008, the Chicago Loop Alliance and the Urban Land Institute Chicago chapter floating a proposal for creating a Chicago equivalent of Rome's Spanish Steps to mediate between Michigan Avenue and the plaza. 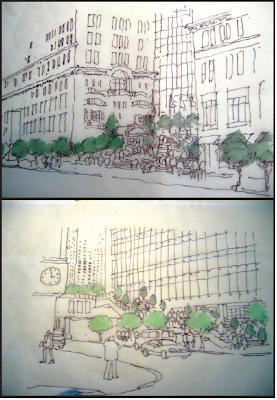 Nothing came of it, and now the gracious stairway entrance off of South Water . . . 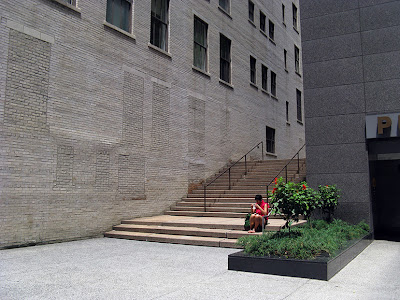 . . . has been sealed off, as has, last time I checked,  the stair from East Wacker.  Hopefully, this is temporary, and they'll return in good condition.

To me the most intriguing possibility lies in a small gap between the buildings on Michigan Avenue . . . 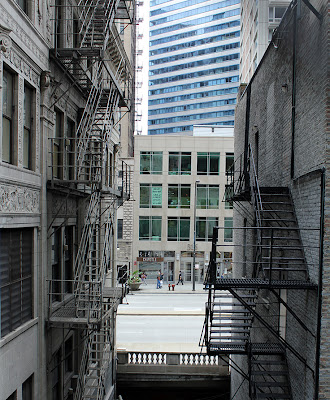 It's not wide enough to create a Spanish Steps style grandeur, but, replacing the existing fire escapes, it's just wide enough to create something so visually arresting that it would pique the interests of the passersby to see just where that funky staircase led.  The Chicago Loop Alliance has been instrumental in bringing art back downtown.  Sponsorship of an architectural competition for the design of that stairway could both eliminate an unsightly scar on the Mag Mile and provide the needed bridge between Illinois Center and the rest of the city.

I also like that plaza but, you're right, some programming and easier access would make it come to life.