Come and Dream With Me: Scorsese's rapturous Hugo and why you shouldn't miss it.


I have a problem.  Whenever I encounter something that matters deeply to me, I experience a failure of nerve.  I fall into full Prufrock mode.  I want make my readers feel for themselves the wonders of my discovery . . . "I am Lazarus, come back from the dead, Come back to tell you all, I shall tell you all."  But in a flash I'm measuring it all off in coffee spoons.  "Do I dare?" and, "Do I dare?"

That is why I didn't publish my piece on Cecil Balmond until a week before his great exhibition at the Graham closed, why I waited for months to try to express my thoughts on Bertrand Goldberg: Reflections, at the Arts Club.  And it's why I'm still working on a piece on Martin Scorsese's new film, Hugo, which has engaged and moved me more than any movie I've seen in a long time.

Hugo has been described as Scorsese's first film for kids, but it is as far from pablum as you can get.  Critics have congratulated themselves with the "discovery" that "Martin Scorsese has made a picture about film preservation!,"  but to say Hugo is a movie about film preservation is like saying À la recherche du temps perdu is a novel about cookies.


The themes of Hugo are as deep and probing as the film is entertaining and beautiful.  While the plot is resolved with absolute grace, challenging questions are often posed rather than answered.  The score by Howard Shore is both incredibly gentle and subtly insinuating.  The performances, especially of Ben Kingsley as the bitter old man who is much more than he appears, are glorious.  The physical production is astonishing.  The evocation of Paris and its architecture, above all the remarkable reproduction of the Gare Montparnasse rail station, and the surreal world behind its walls where Hugo makes his home, will take your breath away.

Obviously, my reaction to Hugo is deeply personal.  I can't guarantee yours will be similar.  But with such possibility of delight, why not take the chance?  Hugo has been around since Thanksgiving, and its theater count continues to shrink.  Go see it - now.  On the big screen, where you can appreciate its ambition and visual splendor.  In 3-D if at all possible, such as the AMC River East, or, if you prefer, in the restored beauty of the Patio Theater, where it begins this Friday.  If you don't like it, I apologize.  If you wind up loving it as much I do, come back next week and we'll talk - I promise. 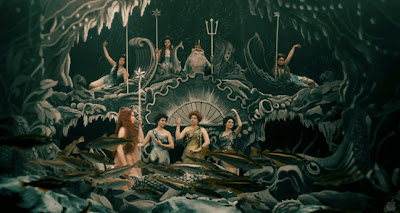 You'd probably also enjoy "Picasso and Braque Go to the Movies" - a related documentary by Scorsese.

Hugo was terrific - even better than I expected. Since it's commonly thought of as a kid's movie (which it isn't, not exclusively), it won't win the best picture Oscar and might not even be nominated, despite the Scorcese aura. Which makes me wonder where there isn't a "best family picture" Oscar, which would raise the bar for such movies and also make parenting even more pleasant.

Does the 3D really add anything? My family saw Hugo on Christmas day at the Tivoli Theater in Downers Grove. It was charming because it's one of the few old theaters that hasn't been chopped up into a multiplex.
But we caught the matinee that was not 3D. I really don't care for 3D. It detracts from the enjoyment of the film in many ways.

actually, I would argue that is one film where 3D does really add something, especially as the camera moves through the great spaces designed by Dante Ferretti. In one of the videos I've linked to the post, James Cameron calls Hugo the best use of 3D he's seen. Except for the archival footage, Hugo's 3D effects were done in the camera rather than in post, and it shows. Scorsese wore flip-up 3-D glasses to be able to monitor exactly what was getting into the camera.

I just saw the movie Hugo. I have never read your blog before and I was trying to remember the line, "Come and dream with me." So I googled it. And your blog came to me.

It really is a magical movie.

Found your post in the same way by looking up Come Dream with me. Read it and just had to comment. I went to see Hugo back in Nov. on a whim. Scorsese's first non-violent children's movie. I had no clue as to the "mystery" theme. It hit me like an emotional train wreck (no pun intended). Needless to say, I am an avid movie buff. I see 2-4 movies a month. There is nothing like seeing a movie on a larger than life screen in a darkened room. NO elaborate stereo system can duplicate it. And finally, we have a movie that celebrates going to the movies. So I can understand the personal ties you have with this movie, because I have them too. I don't even care that it didn't win Best Pic; it's MY Best Pic of 2011 (with the underrated Drive a close 2nd) I can see the problem it had at the awards; it is a Marketing Director's nightmare. The use of 3D is the best I've seen, including Avatar. And knowing a bit of cinema history, I felt that there was no director best suited to bring this story than Scorsese. I spread the word to friends and family and they ask me what's it about. I just tell them, "it's where dreams are made."