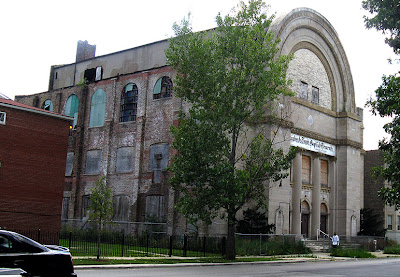 In the 1960's, Chicago was one of the major battlegrounds in the struggle for civil rights led by Martin Luther King, Jr.  He preached at churches throughout the city, including St. Sabina and Mount Pisgah.  In 1966, Dr. King came to Chicago to organize against the discriminatory housing policies of the administration of Mayor Richard J. Daley.  He moved into an apartment in a three-flat at 1550 South Hamlin, in the city's Lawndale neighborhood, to dramatize the issue. 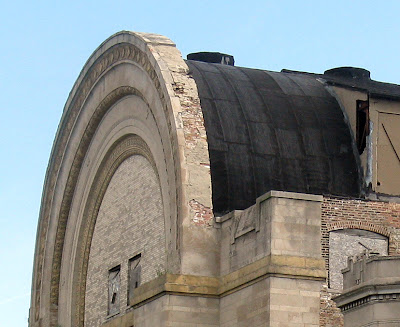 Only a few blocks away was the Friendship Baptist Church, which had moved into their new home at 3411 West Douglas Boulevard, the former Anshe Kenesseth Israel synagogue designed in 1913 by the architectural firm of Aroner and Somers.  It was one of the few churches to welcome Dr. King.  Most black ministers had willingly aligned themselves with Daley's all-powerful political machine.  According to the  book, Black Churches and Local Politics, "With the silent opposition of Daley-backed ministers and the sanctions that Daley had at his disposal to punish activist clergy, church-based resources were ineffective in mobilizing Chicago blacks. " The book quotes one of those ministers who dared to defy Daley, Reverend Clay Evans of the Fellowship Missionary Baptist Church, "Many ministers who were with us had to back off because they didn't want their buildings to be condemned or given citations for electrical work, faulty plumbing, or fire code violations."  Reverend Dr. Shelvin Jerome Hall, the long-time pastor of New Friendship Baptist, was one of the few who stood up to power, opening up his church to King.

The three-flat where Dr. King lived was damaged in the riots that followed his 1968 assassination and were demolished.  For decades the site remained a vacant lot, but last spring, new housing was finally built there, designed by Johnson and Lee Architects.  In 1983, Friendship Baptist moved to a new church they had constructed for themselves at 5200 West Jackson, beginning a long period of decline for the Douglas Park building, 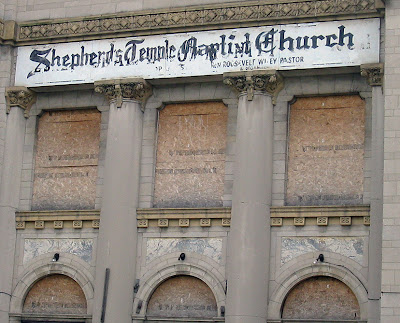 Just in time for Christmas, the City of Chicago's Department of Buildings declared the historic structure on Douglas Boulevard - vacant and deteriorating for several years - "in imminent danger of collapse" and the Law Department has issued an emergency demolition order.  Activists have begun a petition drive to stay the demolition.  Last week, Lee Bey created this post about the church, with great photographs.  Preservation Chicago listed the building as one of its 2011 Seven Most Endangered, and you can find their report, from which the above pair of photographs was taken, here. 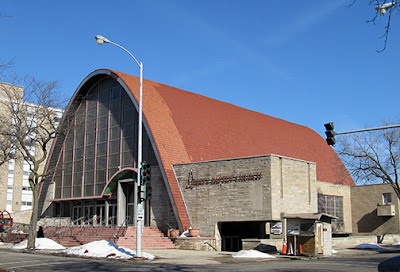 Although Dr. King's experience there was contentious - at a famous meeting, he was challenged by the newly emerging Black Power militants - at Liberty Baptist Church, at 49th and South Boulevard, unlike Shepherd's Temple, has endured.  Unlike so many Afro-American churches, which found their homes in houses of worship abandoned by fleeing whites, this striking building, designed by architect William N. Alderman, with its own kind of distinctive modernism, was built specifically for the congregation.  Dedicated in 1956, it remains a handsome presence on what has now been renamed Dr. Martin Luther King, Jr. Memorial Drive, and down through the decades it has been central to the civil rights struggle in Chicago. 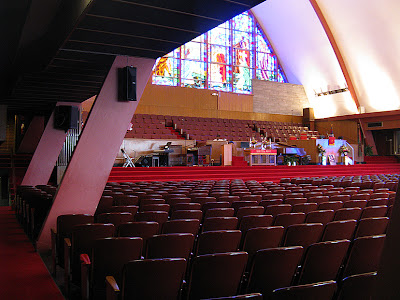 You you can read all about it in this article from last January, Modern Struggles, Modern Design, Dr. King and the story of Liberty Baptist Church.

I am an architect, preservationist and board member of the Chicago Jewish Historical Society. I am currently spearheading the effort to stop the demolition of the former Anshe Kanesses Israel synagogue at 3411 W. Douglas Blvd. The building, which was sold to Friendship Baptist Church in the 1960's, later became Shepherd’s Temple Baptist Church, and is currently owned by Abundant Life World Outreach.

I am working along with Preservation Chicago, Landmarks Illinois, and a host of other governmental, neighborhood and civic entities to prepare a proposal for saving this significant architectural and historic structure. Our primary direction, at this point, is to overturn the order of demolition while we seek to securely "mothball" the building for future reuse.

Yesterday, a number of us, including Ron Grossman of the Chicago Tribune were able to tour and photograph the interior (which is significantly damaged). A number of photos by Susanne Helmert are posted online at http://www.flickr.com/photos/erdbeertorte/sets/72157628903814129/with/6711303849/.

If you are interested in being part of the effort to save this important landmark structure, please feel free to contact me.

You might also consider exploring First Church of the Brethren, at 425 S. Central Park Blvd. in East Garfield Park. This is where King actually kept his office while working with Chicago's just housing campaign. The congregation is still there and older members still remember when King roamed those halls and streets.

Two additional congregations also now share the building: Chicago Community Mennonite and Roca de Esperanza. The sanctuary features two matching magnificent stained glass windows with King's likeness in the bottom corner to honor his legacy and spirit in the building itself. Recently the sanctuary had to undergo major roof renovations, and the three churches gathered together for the first time back in the renovated space for our annual MLK joint service where black, white and brown attempt to BE the beloved community King proclaimed and longed for.

Full disclosure: I am the pastor of Chicago Community Mennonite. As renters and inhabitants of that building for the past 15+ years, we are honored to call King's Chicago church home our own.