today's daVinci or merely the future of British Architecture? Thomas Heatherwick at Crown Hall this Thursday

click images for larger view
It was the architectural sensation of Shanghai 2010 Expo - the Seed Cathedral, the UK Pavilion designed by Thomas Heatherwick


a 20-metre high building, constructed from 60,000 transparent 7.5-metre long optical strands, each of which has embedded within its tip a seed. The interior is silent and illuminated only by the daylight that has filtered past each seed through each optical hair.

In August of that year, roaming scholar Edward Lifson had a great piece in Metropolis on the Seed Cathedral, including a Q&A with Heatherwick, of London's Heatherwick Studio, who says that the project brief was "exactly the same brief that every other designer of every other pavilion has been given.".  Lifson's article shows how what they got was anything but ordinary.  Don't miss Lifson's end photograph, which is super-cool.  Make up your narrative (but the one combining languorous eroticism and Sunkist jellies is already taken.)

In a last-minute coup, the School of Architecture at IIT is bringing Thomas Heatherwick to Crown Hall this Thursday, January 26th, for a 6:00 p.m.,  lecture, Current Work, in which we expect the architect will talk about such spectacular projects as the London drawbridge that doesn't just rise up, Chicago bascule fashion, but actually bends back and curls up into a ball.

There's also a streamlined resign of the classic London red double-decker bus, and this . . . 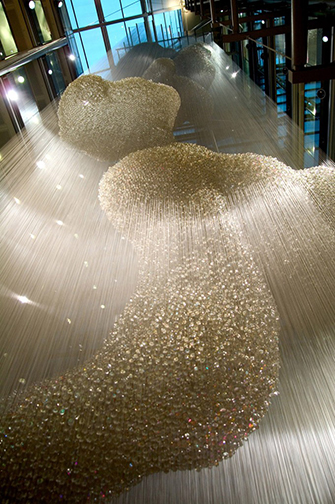 . . .  Bleigiessen, the spectacular piece pictured above, in the 8-story atrium of the London Headquarters of The Wellcome Trust.  Bleigiessen refers to a German/Austrian New Year's tradition is which small amounts of lead are melted in a spoon over a candle and then dropped into a bowl of cold water, where they quickly harden into shapes that are then read, like tea leaves, to foretell a person's future for the coming year.  Heatherwick and his associates repeated this process to create over four hundred "extraordinary and complex forms in a fraction of a second."  Finally they came up with a single final form as the building block for the installation . . .


142,000 glass spheres suspended on 27,000 high tensile steel wires; 15 tonnes of glass and just under a million metres of wire. The spheres, made in Poland in a spectacle lens factory, were the result of a collaboration with Flux Glass, their shifting colour and brightness coming from a layer of dichroic film set between the two hemispherical lenses that make up each sphere.

Something like this could be perfect for the tall Macy's atrium not covered in Tiffany - are you listening, Terry Lundgren?

Heatherwick has been called everything from the daVinci of our time, to the man who could be "the future of British, if not world, architecture."   No pressure there.

In the current edition of Intelligent Life, there's a great profile of architect, The Designer Who Makes Buildings,  by Bryan Appleyard - the same guy who hinted at Heatherwick as architecture's savior. Heatherwick's entrance?


Finally, a dark, curly-haired, slightly bearded man appears with a wide-open, ecstatic expression, a bit like Harpo Marx when playing the harp.

An ecstatic Harpo Marx?  Can Crown Hall's minimalist sobriety endure such subversion?  Will it dissolve into a mist?  Beams of metal in spontaneous meltdown, reborn as a galaxy of shimmering spheres?  Stop by Thursday at 6:00 and find out for yourself. 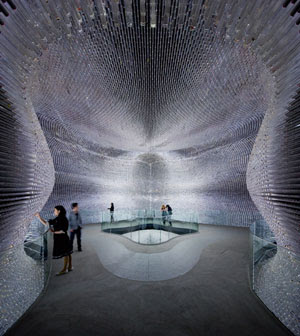 Something like "Bleigiessen" would be great in the 1992 atrium over Holden Court. But what has Macy's done to majorly enhance State Street since taking over?

Macy's has shut down entire banks of elevators and walled off whole series of escalators. Let's not even talk about the disuse of that cool staircase on 8. The brass Field's plaques appear not to have been polished in years. Anything to cut corners to eek out the balance sheet at State Street. Macy's is putting millions in Herald Square so it doesn't look so shabby compared to the former Field's flagship. I think we're lucky if they don't put up Armstrong Ceiling Tile in the atriums at State Street. Given Lundgren's attitude, I would be relieved if they simply didn't degenerate the building more.