The Mummy of River North: Chicago has gone New Hotel Crazy (Just not at LaSalle and Huron)

Update, April of 2012: Construction is about to restart to complete the project and remove The Mummy's bandages.  Read all about it here. 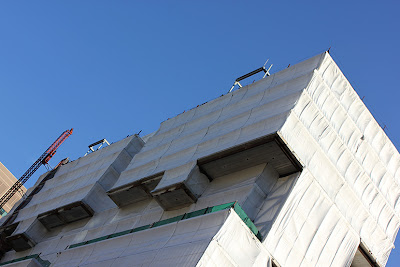 click images for larger view
It didn't take much.  Just a good uptick from the dismal post-crash occupancy rates, and we've got new hotels coming out of our ears.  Richard Branson is converting the Rapp & Rapp designed 203 North Wabash into a 250 room Virgin Hotel (hopefully, non-virgins will also be admitted.)  Aries Capital is looking to make the Art Deco Chicago Motor Club Building into a hotel.  As of last July, plans were still in place to make a dozen floors of Mies van der Rohe's IBM building into a Langham Hotel.  And just last week, the Sun-Times David Roeder was reporting a hotel conversion may also be in the future of the London Guarantee Building at Wacker and Michigan.  And then there's those three new River North hotels under construction with 600 rooms that we discussed yesterday.

But just a few blocks away, there it is, just as it has been since 2008, when the money ran out and construction stopped: the Staybridge Suites Hotel at 127 West Huron.  The handsome, sculpted design, by Valerio Dewalt Train, made use of innovative staggered truss framing for a lighter weight structure.  Ironically, the other advantage of staggered truss is speed of construction. 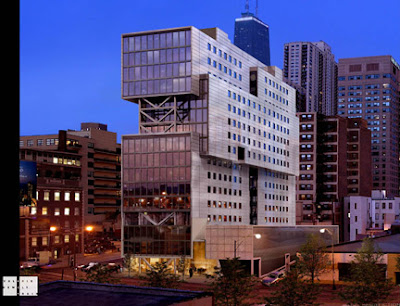 So the steel frame went up quickly.  And then it sat there, awaiting its purpose. 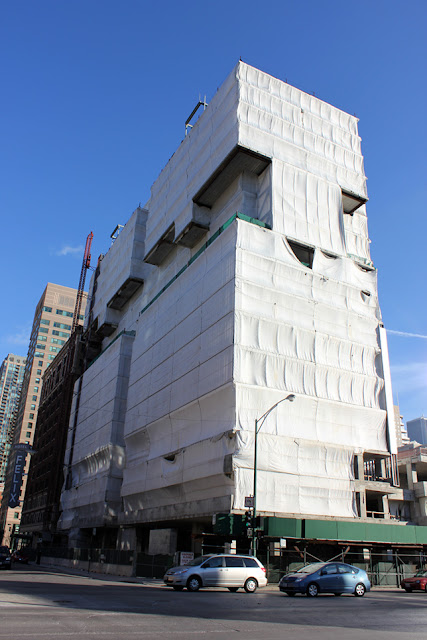 After a while, the frame gets covered with protective fabric.  Over time, the fabric comes loose, and flaps in the wind.  Then it gets secured again.  Rinse and repeat. 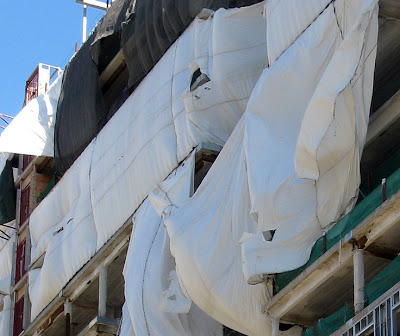 Last year, a group led by Oxford Capital, which converted the former Hotel Wacker right next door into the Hotel Felix, and led an abortive attempt to put a hotel into the IBM before passing it on to Langham, took over the construction loan on the Staybridge.  That was last June.  That news item remains the most recent on the Oxford Capital Group website, linking to a no longer available article in Crain's. 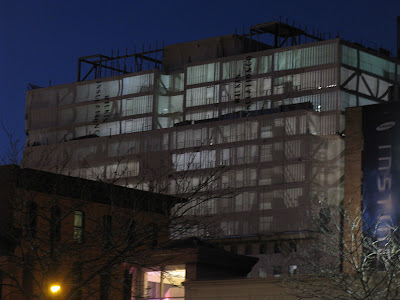 Not much seems to be going on at the moment.  The sheeting - ghost armor - seems secure for now.  It seems like every developer has a hotel deal going.  Why is everyone spooked by Staybridge? 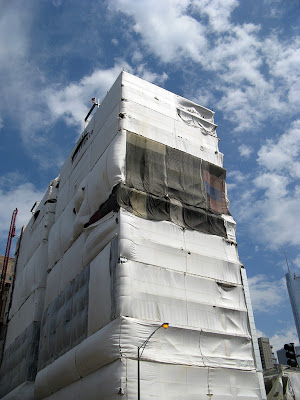 Why is this project doomed? Perhaps it's not a good thing for an architectural firm to have its firm's website with such a morbid URL, build or die.com

Are they referring to their designs or their client?

The majestic splendor of the place can blow you away with a complete arrangement of rooms suiting your pocket and tastes.
Hotel Design