See, we'd told you there would be a lot more.  We've just added over a dozen new great items to the January Calendar of Chicago Architectural Events, including two new exhibitions.

On Monday at Crown Hall, IIT opens a new show, Struggling Cities: From Japanese Urban Projects in the 1960's, which runs through the 31st.  The Metabolists are back with a vengeance, and Struggling Cities includes work by Kiyonori Kikutake, Kisho Kurokawa, Masato Ohtaka, Fumihiko Maki,  Noboru Kawazoe and Arata Isozaki, whose  “Cities in the Air” is pictured here.  In conjunction with the exhibition, there will be a lecture at Crown Hall this Thursday, the 12th,  at 6:00 by critic and historian Kenneth Frampton, Ware Professor of Architecture at Columbia.  (There will also be a February 25th appearance by Peter Frampton at the Chicago Theatre, but we're hearing this may be an unrelated event, more about music than an actual lecture.)

Over at the ArchiTech Gallery, there's a new show, Architectural Drawing: From Europe to America, that runs through April 28, 2012 and features work by Louis Villeminot, George Mann Niedecken and Alfonso Iannelli, among others.  Hours are Wednesday, Thursday, Friday and Saturday from noon to five, "or by chance or appointment on Monday or Tuesday."

Elsewhere, we've added this month's events from the Chicago Center for Green Technology, which is branching out with a morning session on Landscape Design Series: Part 1 featuring the staff of the Lurie Garden and Roy Diblik at the Chicago Cultural Center on Saturday the 14th, and a Wednesday January 25th session on Green Roofing for the Homeowner and DIY-er at the Peggy Notebaert Nature Museum, as well as its usual programs at the Center, itself.

Crain's Chicago Real Estate Daily has a morning panel, Residential Forecast, on Wednesday the 18th moderated by Alby Gallun and featured Stephen Baird, Andy Konovodoff, Buzz Ruttenberg and Steven Fifield.  If there's a Q&A, maybe someone can ask Steve Fifield if his projects, like the ironically named Left Bank, really have to suck so much. 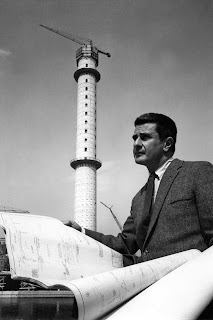 And lastly, this is the last week to see two essential shows on Bertrand Goldberg at the Art Institute, Bertrand Goldberg: Architecture of Invention, and the uniquely expressive Inside Marina City: A Project by Iker Gil and E.G. Larsson.  Both are must-see exhibitions, and you have only through next Sunday to catch up with them.

Check it out:  There are still over three dozen events on the January Calendar of Chicago Architectural Events.