We've got two new exhibitions opening this Friday at the Gallery 400 at UIC.

Global Cities  Model Worlds "explores the spatial and social impacts of 'mega events' such as the Olympics and Word's Fairs, and the means by which their host metropolises work to secure their position as "global cities." click images for larger view
The World Finder: Pocket Guide to Hell, explores the story of Steele MacKaye and his plan to build the "Spectatorium" at the 1893 World's Columbian Exposition in Chicago, a massive display of the spittoon-ridden era's compulsion for spitting.  No, wait.  That was the Expectoratorium.  The Spectatorium, in contrast, was to be "the world's largest theater," hosting an epic depicting Columbus' voyage to America in four Wagnerian acts, complete with an ocean with real water and a cast of thousands.  I'm hearing it didn't go exactly as planned. 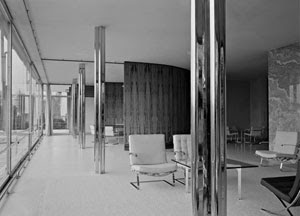 Another addition, Celebration of the Reopening of the Villa Tugendhat: Mies Here and There, is an all-day symposium on Mies van der Rohe's famous house .  It takes place this Saturday, January 21st,  in the auditorium of the Rem Koolhaas-designed Campus Center at IIT.  The free event will include talks from architect Iveta Cerna and Chairman Ivo Hammer of the Tugendhat House International Committee, as well as from Dirk Lohan and Professor Petr Pelcak of the School of Architecture, Brno University of Technology.  Tugendhat is also the focus of two other programs this Thursday, the 19th, with Pelcak lecturing on The Architecture of Brono Functionalism, 1919-1939 at noon at AIA Chicago,  and Hammer and Cerna talking on Mies Here and There - Restoration of the Villa Tugendhat, Czech Republic, at the Chicago Architecture Foundation at 6:00 p.m. 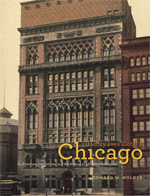 Also on Saturday the 21st, there's the Future City 2012 Chicago Regional Finals at Student Center East, UIC.  On Thursday,  the 19th,  Edward W. Wolner discusses his excellent new book, Henry Ives Cobb's Chicago, for Landmarks Illinois at the Cultural Center at 12:15, and Tom Beeby talks on Connecting with the Past: The Harold Washington Memorial Library Center, for ICA&A Chicago-Midwest at the Driehaus Museum/Nickerson Mansion at 6:00 p.m.

Check it out.  There are still nearly three dozen great programs to come on the January 2012 Chicago Calendar of Architectural Events

the Saturday symposuiyum at IIT is actually only a half-day, from 9am to 12:30pm.