click images for larger view
So, I was looking over the international box office yesterday, and I came across the fact that a film with an architecture background, 건축학개론, or Architecture 101, has been the most popular film in South Korea over the past several weeks, handily beating out The Hunger Games, Wrath of the Titans and Space Dogs 3D.

Condensing the plot from the entry on asianwiki . . .


35-year-old architect Seung-Min receives a visit at his office from a woman he doesn't recognize at first, but soon realizes is Seo-Yeon, his first love, who he hasn't seen  since his freshman year in college. Seo-Yeon now has a request. She wants to hire Seung-Min to rebuild her home on Jeju Island.

The film then flashes back to that introductory architecture class where the two, now played by different, younger actresses, first met and fell in love.  Then back to the present, where Seo-Yeon goes over Seung-Min's head to get his boss to assign him to rebuilding her house.


Old memories of love and heartbreak will soon resurface, as they find themselves at different junctions in their lives ...

You'd think architects, working in such a glamorous trade (I know, I know, but just go with me on this) would be a natural for film romances, but not even Sandra Bullock and Keanu Reeves mixing architecture with time travel could create box office gold in 2006's  The Lake House, which was actually a pretty good picture, shot on Chicago locations and with the late Prairie Avenue Bookshop serving as the offices of Reeve's architect dad, played by Christopher Plummer. 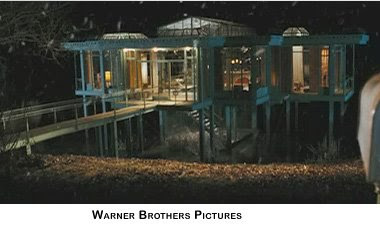 The Lake House of the film's title was actually built at Maple Lake in the Palos Forest Preserve, 2,000 square feet from sketches to completion in just ten weeks, and dismantled after the film's shoot.  Read my story on the Lake House, its construction and short life here.

Otherwise, what have we got:  The Fountainhead, Strangers When we Meet, Adam Sandler in Click?   There should be one great romance about architects.  I've got one in my head, that starts at a ship terminal in Trieste in 1884, courses through 1893 Chicago, and finishes along Lake Shore Drive in 1949.  Don't wait up.

Let me know if you come up with something else.  For now, here's the trailer for 건축학개론.

Hmnn... must really be a great movie considering it beats Hunger Games.