The synapses of America: Koblin's Flight Patterns at Art Institute's Rethinking Typologies, plus Tagore's Paintings, only through Sunday


Rethinking Typologies is a kind of "greatest hits" placeholder show in the Modern Wing's architectural galleries,. There's a rich selection of drawings from everyone from Paul Schweikher to Bruce Goff to Richard Neutra to Helmut Jahn.  The model of the Bruce Graham/Walter Netsch Inland Steel Building is on display, as well as one of Studio/Gang's Aqua and Stanley T. Allen's New Maribor Art Gallery from 2010.


From the development of the modern house to the emergence of information design, each era faces the challenge of adapting conventional ideas to new technology, social needs, and cultural ideals. This exhibition takes a broad historical view of the innovations that have shaped contemporary life and the built environment through suites of work devoted to historical and emerging typologies in architecture and design. Spanning the 20th and 21st centuries, these thematic suites highlight important recent acquisitions and areas of strength in the permanent collection of the Department of Architecture and Design at the Art Institute of Chicago.

The design Gallery includes a fascinating selection of items in graphic design, designer flatware, furniture and lighting, including the Plumen 101,  from Hulger and Samuel Wilkinson Design, seen twirling above and at rest below, billed as "the world's first designer low energy light bulb." 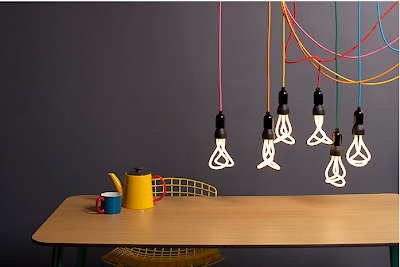 click images for larger view
We hope to be writing more about this show,  and since it runs through July 29th we might even get around to it, but for now, we're bringing you, at the top of this post, a video of Aaron Koblin's Flight Patterns, 2011.

This work was originally developed as a series of experiments for the project "Celestial Mechanics" by colleagues Scott Hessels and Gabriel Dunne at UCLA. FAA data was parsed and plotted using the Processing programming environment. The frames were composited with Adobe After Effects and/or Maya. Visit original project website here.

According to the artist's website, Koblin "takes real-world and community generated data and uses it to reflect on cultural trends and the changing relationship between humans and the systems they create. "

Flight Patterns is like a brain scan of a restless America constantly on the move.  As midnight approaches, the nation begins to go to sleep.  Somewhere around 1:00 a.m. EST, the continent goes almost completely dark. A delicate web of red-eye flights from the West Coast start threading east.  The East Coast - the frontal lobe? - begins to glow, an increasingly dense matrix.  Over the Atlantic, a spray of flights from Europe approach, and soon the entire nation is a mass of colorful synapses pulsing with charges both weak -sleeping, daydreaming - to strong - tapping away on laptops and iPads, and an occasional flight attendant or pilot in full mental meltdown.

Tellingly, there seem to be a lot more flights to Hawaii than to Asia - a troubling  harbinger? 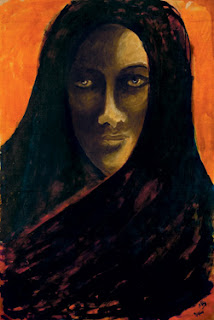 And speaking of the Art Institute, I should mention that you have only through Sunday to see another great show, The Last Harvest: Paintings of  Rabindranath Tagore, which closes on Sunday the 15th.  Nobel Prize winner Tagore, whose 150th birthday was celebrated last year, was one of the greatest cultural figures to come out of India - poet, musician, philosopher.  And if that weren't enough, he decided at age 63 to become a painter. 61 of his works are on display in the Art Institute show, mostly striking portraits in an arresting and individual palette.  Tagore once referred to himself as "a celebrated colour-blind person" and was said to have difficulty distinguishing reds and greens.

Today, Tuesday, April 10th at 6:00 p.m. in the Art Institute's Fullerton Hall, scholar Partha Mitter will lecture on The Radical Imagination of Tagore's Painting placing "Tagore's art within the context of the development of modernism in India."