Pedro E. Guerrero, one of the greatest photographers of 20th century,  was born in 1917, which makes him somewhere around 95 years old.  Which is another excellent reason that if you're anywhere near Los Angeles on April 5th, you make your way to LACE (Los Angeles Contemporary Exhibitions), 6522 Hollywood Boulevard, where at 6:30 p.m., Pedro E. Guerrero is scheduled to talk about his work at the opening of a new exhibition, Pedro E. Guerrero: Photographs of Modern Life, which runs only through April 25th. 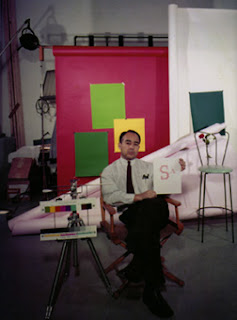 ". . . his photographs have been featured in nearly every major publication by and about Wright," says the exhibition website, "


He approached architecture as though it were sculpture, capturing the dynamic spatial qualities of the compositions. This sensitivity attracted magazine editors and, after moving to New York and then Connecticut in the 1940s, he established a career that paralleled that of Julius Shulman and Ezra Stoller. In addition to commercial work for journals like House & Garden Magazine, Vogue, and Architectural Record, for which he documented buildings by modernists from Eero Saarinen to Joseph Salerno, he also photographed the work of “The Harvard Five,” a group that included John M. Johansen, Marcel Breuer, Landis Gores, Philip Johnson and Eliot Noyes. Guerrero also established close relationships with artists Alexander Calder and Louise Nevelson.

Guerrero's life is as fascinating as his work, and he captured it an remarkable book,  Pedro E. Guerrero: A Photographer's Journey. (Princeton Architectural Press, $55.00), which I wrote about back in 2007.  Photographer's Journey include a generous sampling of some of the best of Guerrero's eloquent work, much of it in color.  As I wrote in 2007 . . . 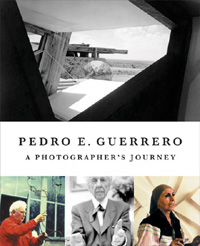 The beautiful, often iconic photographs alone make this a must-have book, but what keeps me returning to the volume is Guerrero's own story, and that of his family, which weaves through the book, in simple, artless prose, with accumulating power.


Adolfo Guerrero, my grandfather, was the spoiled son of a wealthy but dysfunctional family in Durango, Mexico. His father, a tanner, found a buried treasure while digging a tanning pit. The family ran through the money fast, however . . . When Dad was seventeen and Mother fifteen, he saw her photograph at the home of the friend, and they began corresponding. Soon they agreed to meet in Casa Grande, Arizona. They were to walk toward each other, and if either did not like what he or she saw, they would keep going.

Of the thousand or so books in my library, Pedro E. Guerrero:  A Photographer's Journey is among my favorites.  I envy you if you're in L.A. this Thursday - you have an opportunity no one should pass up.

Read more about this unique artist's work and life in Pedro E. Guerrero's American Century.
(Click on time for permalink) 9:45 AM