The Past as Appliqué, Bettina Pousttchi's Framework and Echo and the timeline of German architecture

Framework, the latest work of German-Iranian artist Bettina Pousttchi,  which runs through June 17 at Schirn Kuntshalle Frankfurt, is a subversive appliqué that transforms transparency to texture. The textures are derived from the half-timber houses of Frankfurt's old town square the Römerberg, which is, itself, an appliqué on a void, a reconstruction of a historic district mostly smashed into oblivion during World War II bombings. Pousttchi extracted design elements from two Römerberg houses - the 17th century Schwarzer Stern, reconstructed in 1983, and the Wertheym, one of the few buildings that survived the war - and applied them to the glass of the Schirn's rotunda and exterior facade.

click images for larger view
"I would be delighted", Pousttchi says in the video posted above,  "if Framework triggered a dialogue about how we treat our cities, and how we deal with history, with recollection . . . How do we want to live in the future?  Are such "facade cities" what we really want?"

Pousttchi's most famous work to date is 2010's Echo, at the Temporäre Kunsthalle on Museum Island, not far from the Altes Museum in the former East Berlin,  The Temporäre Kunsthalle stood on the site of the Palast der Republik . . .
. . . a modernist, curtain-walled structure with bronzed mirror windows, designed by architects Heinz Graffunder and Karl-Ernst Swora and completed in 1976 to serve both as the seat of the East German parliament, and a cultural center. 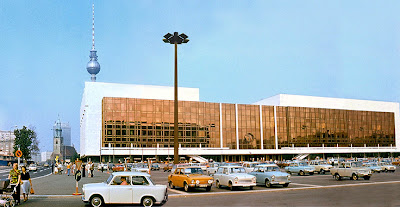 After the reunification of Germany and the move of the nation's capital back to the Reichstag, is was decided to demolish the barely quarter-century-old structure.
35,000 tons of the building's steel was shipped to the United Arab Emirates and used in the construction of the Burj Khalifa, the world's tallest building.
Completed in September of 2008 on the site of the Palast, the Temporäre Kunsthalle, was a low-cost (€ 950,000) rectangular structure designed by Adolf Krischanitz with an exterior shell of fibre cement panels, to house a privately-funded two year showcase for contemporary artists, several of whom used the exterior's blank walls as a canvas.
For Echo, Pousttchi transformed the Temporäre Kunsthalle into the building it had replaced, by applying 970 black-and-white photographs to the blank exterior walls portraying the curtail-wall facade of the Palast der Republik.  It was not - nor intended to be - a literal replication, but rather a reconsideration.
After the Temporäre Kunsthalle closed, as scheduled, in August of 2010, present, past and future floated uneasily on the buildings facades as Pousttchi's poster-photographs pealed away, revealing the original blank walls beneath, while the entire structure awaited its own obliteration to make room for another appliqué, a reconstruction of the Baroque 18th-century Stadtschloss, the winter palace for the kings of Prussia, which was the occupant of the site for over two hundred years, before it was damaged beyond repair by Allied bombings and demolished in 1950. 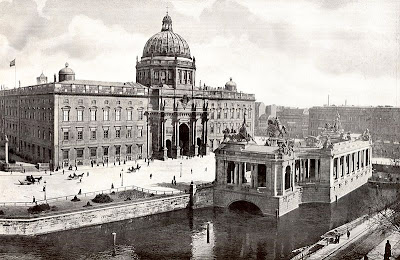