North Dakota Republican Defends Modernism: Can the Apocalypse be Far Behind?

According to an Associated Press report, it all began with a gibe from a Minnesota legislator, calling the State Capitol building in Bismarck, North Dakota "embarrassing . .  . State Farm Insurance called.  They want their building back."  It resulted in North Dakota Governor Jack Dalrymple shooting back that his state's capital was "one of the most pleasing Capitol buildings in the United States, and I have seen several of them myself."

Not only is the North Dakota capitol modernist, it's a bit of Chicago on the Missouri, a 241-foot-, 8-inch tall tower designed by Holabird & Root to replace the previous building, completed in 1884, which burned to the ground in 1930.
In 1931, the state legislature appropriated $2,000,000 for a new building, a spartan amount compared to recent Capitol structures in Louisiana ($4,000,000), and Nebraska ($10,000,000).  "Domed pseudo-Renaissance state capitols are sinking low on the Western horizon," said architect F.A. Gutheim, and in Bismarck, Holabird & Root, working with two leading North Dakota architects, Joseph Bell de Remer and William F. Kurke, came up with an undeniably spartan profile, made even more so when much of the detailing Holabird & Root used in their Chicago skyscrapers was deleted as "unneccessary adornments," moving the design away from Art Deco to something more in line with the emerging International Style.  Because North Dakota was lacking in quarries, the structure used Bedford limestone from Indiana and Black Wisconsin granite for the cladding,  gray-white Tennessee marble for flooring, and polished travertine from Montana for the walls. 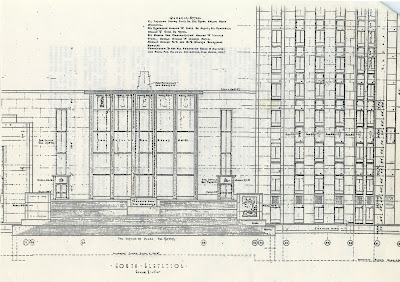 In the depths of depression, keeping costs low was primary.  Half of the 320 acres of the Capitol grounds were sold off to raise funds.When workers making 30 cents an hour struck to get 50, the construction site was placed under martial law.  After all was said and done, when the new building opened in 1934, it came in under budget, with an official completion cost of $1,984,488.26. Which is only a little more than the estimated $1,952.490 (and no cents) required to reverse the ravages of time on the building's envelope, as quoted in a 2010 report prepared with the assistance of Wiss, Janney, Elstner.

Still, the final work is striking and gracious, with bronze sculpture by Edgar Miller "representing the Indian, Hunter, Trapper, Farmer, Miner, and the Mothers of the State", and a light-filled, 342-foot-long, 42-foot high memorial hall with striking Art Deco chandeliers providing views of the city, the Missouri, and the distant bluffs.
The legislative chambers are semi-circular, paneled in chestnut and oak, with curving stripes of lighting in the ceiling.

Governor Dalrymple, I'm with you.

I had never seen that building before, and I love it. Almost every other state capitol (or every other?) is some variant on the U.S. Capitol. That's a magnificent building, of course, but it's been done already and (with the state capitols) overdone. What a refreshing change of pace the North Dakota capitol building is.

A symbolic break with tradition...a duality embraced...stood the test of time. What does 2 million get today?