The Battle to Save the Portage Theater and the Chicago 7 Most Endangered Wednesday, Marina City Thursday - April begins

One of these days I'll actually get to the April 2012 Calendar of Chicago Architectural Events.  Right now there are a couple dozen listings, with many more to come.  I'm not sure if I have the energy for the 33 flicks, plus panel discussions, making up this year's edition of the Architecture and Design Film Festival, beginning April 12 at the Music Box.
This Wednesday, April 3rd, 12:15 p.m. at the Chicago Architecture Foundation, 224 South Michigan, Jonathan Fine of Preservation Chicago will reveal what's on this year's list of the Chicago 7 Most Endangered Historic Places of 2012.  Although they let a least one of the cats out of the bag with the photo, shown above, that accompanied their email about the event.  The Portage Theater, designed in 1920 by architect Lindley Phelps Rowe for Fridstein & Co with Mark D. Kalischer adding later alterations, and reopened in 2006 after a five year absence with a a major restoration and very active film program, is under threat of being acquired by the Chicago Tabernacle congregation to be converted into a church.

A Save the Portage campaign has caught fire with large turnouts of opponents at community meetings and a Save the Portage Facebook page that has quickly accumulated nearly 3,000 fans.  While he would welcome the church to his ward elsewhere, 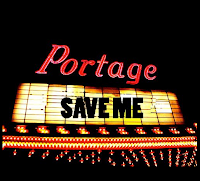 45th ward alderman John Arena has opposed the conversion as an inappropriate usage for such a highly commercial street as Milwaukee Avenue, telling the Chicago Tribune's Nina Metz that it would, among other things, shut down the liquor license for a restaurant already being built out just across the street.

The issue has already gotten the attention of the Commission of Chicago Landmarks, which has placed the matter of landmarking the Portage on the agenda for it's monthly meeting, open to the public, this Thursday, April 5th, 12:45 in City Council Chambers, room 201-A, 121 North LaSalle.  The Portage is currently rated "orange" on the city's Historic Resources Survey, for "potentially significant in the context of the surrounding community."

This Wednesday, April 4th, at The Portage, the Northwest Chicago Film Society will be presenting a rare showing of a 35mm print of the legendary Max Ophüls' 1933 film Liebelei . . . 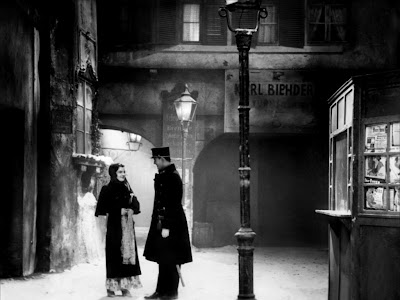 Vienna, 1900. Love blossoms between young lieutenant Fritz (Wolfgang Liebeneiner) and violinist’s daughter Christine (Magda Schneider), but his past affairs threaten to destroy their union. Significantly anticipating the milieu and atmosphere of Ophüls’s American masterpiece, Letter from an Unknown Woman, Liebelei was the director’s greatest success in his native Germany. By the time it opened in March 1933, Hitler had ascended to power, the distributor had removed the names of both Ophüls and playwright Arthur Schnitzler (both Jews) from the credits, and Ophüls had fled the country, embarking on a fugitive career that never returned to normalcy. 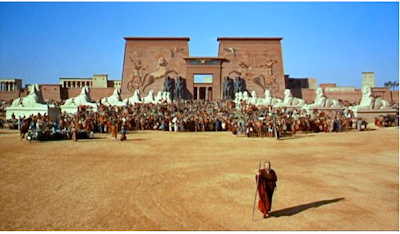 Then just in time for Easter, Saturday, April 7th at 7:00, there'll be a showing of a 35mm print of Cecil B. DeMille's 1956 epic, The Ten Commandments, with a chance to see DeMille's spectacular architectural reimaging of the City of the Pharaohs and Avenue of the Sphinxes at a scale of image in which they can fully appreciated.  A great room like the Portage is the place where movies are meant to be seen.


Just us, the cameras, and those wonderful people out there in the dark!

Elsewhere, also on Thursday, the 5th lunchtime at the Cultural Center, Igor Marjanović will be discussing his book, Marina City: Bertrand Goldberg's Urban Vision for Friends of Downtown. Later in the month, we've got Bernard Tschumi at IIT, Kersten Geers / David van Severen and Wiel Arets at UIC, DocoMomo President Theo Prudon at Häfele, and Gordon Gill and Gunny Harboe at Unity Temple.  Stay tuned for a lot more - and check out the story so far here.
(Click on time for permalink) 12:01 AM

The architect for the Portage Park Theater was Lindley Phelps Rowe for Fridstein & Co, not Henry Newhouse. Mark Kalischer was architect for its later remodeling.

Whoever goes to the Portage Theater on Fri. April 6 will see "Ghostbusters," and that movie is markedly different from "Liebelei."

Thanks BW for the great info and Anonymous for being what I desperately need - a good proofreader. Correction made.