Would you believe we're still working on the April 2012 Calendar of Chicago Architectural Events, but that we're already up to over 50 great events still to come this month?

It's doubtful Tschumi's lecture will include the following slide . . . 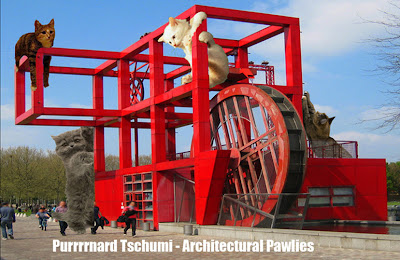 . . . in which his structure for Paris's Parc de la Vilette is repurposed as a climbing tree - for cats.  It's part of a bit of madness let loose in the world by the website Archinect: Architectural LOLCATS

According to Wikipedia (and would they lie?) although LOLCATS was a meme just waiting for the invention of Photoshop and Facebook to unleash its viral presence, the concept had its origins in a series of 19th century postcards depicting cats taking over human tasks and costumes.

In actuality, Egyptologist Zahi Hawass contends that the LOLCAT is an Egyptian creation, as proven in recently discovered hieroglyphics at the ancient city of Pi-Ramses that depict a feline in Pharoah's Nemes Headdress with the caption - translated only this past February - reading, "I can haz Ethiopiaz?"

The tumblr page has any number of new additions, including a BIG Lego model overseen by a master cat, a kitten drinking milk out of the upturned sphere of the Chamber of Deputies at Oscar Niemeyer's Brasilia, a contented giant orange tabby taking a nap on the roof of Saarinen's TWA Terminal, and a NSFW photo of an in-the-buff Corbu complete with cat in matching spectacles. 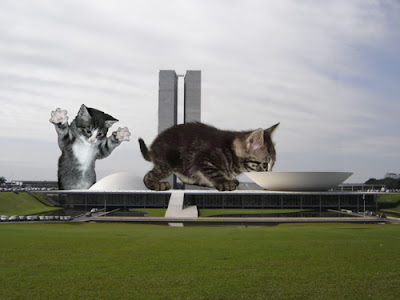 Not to be outdone, the people at Studio/Gang have come up with their own set of Archi-cats, which they've posted on Facebook.  My favorite takes off from Gang's recent book Reverse Effect to speculate on how the Asian Carp problem could be solved through the previously unconsidered remedy of unleashing giant hungry cats on Chicago's waterways. 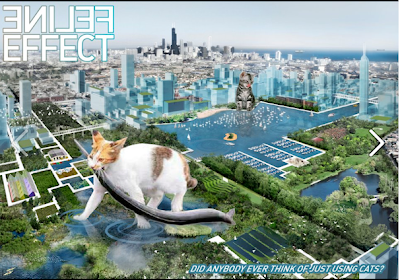 This week, on Tuesday the 10th, there's The Role of Designers in Post-Disaster Scenarios: Talca, Chile, lunchtime at AIA Chicago, the all day SEAOI seminar, The Seismic Design of Bridges, Wednesday at the UBS Tower and Katherine Rinne, Plumbing Rome at IIT.  On Sunday, April 15th, the National Public Housing Museum is holding its fundraiser, An Afternoon of Good Times, A Place Called Home, at Salvage One.  One Monday, April 16th, Colombian architect Giancarlo Mazzanti lectures at the Institute Cervantes in conjunction with their new exhibition, Columbia:Transformed.

And then starting this Thursday, April 12, there's the 2012 edition of the Architecture and Design Film Festival 2012, at the Music Box, with 33 films, panel discussions, and a special edition of Pecha Kucha, through the following Monday.  We hope to be writing about it more tomorrow, but for now, check out the over half-a-hundred items - with still more to come - on the April 2012 Calendar of Chicago Architectural Events.