We don't usually include tours on our calendar because there are just so damn many of them, but we did one to mention two:

Next Saturday, April 28th, is Obscura Day "an international celebration of unusual places" and Forgotten Chicago is offering a walking tour of Goose Island and Pulaski Park from 12:00 p.m to 2:30.

Goose Island is one of the more obscure areas of Chicago. Primarily industrial, it once contained a working class Irish residential enclave as well. We’ll discuss the history of much of the island, and examine remnants from its manufacturing and residential past.

We’ll also venture off the island to tour the once working-class neighborhood surrounding Pulaski Park. The area is dense with mixed architectural uses and history. Additionally, it has been shaped by various political forces over the years, from Progressive Era reformers to less-than-progressive machine politicians. We’ll check out some of the tangible physical evidence that reflects the area’s political history, and architectural oddities and other curiosities in the built environment.

The cost is $12.00, and with a limit of 35 participants, I'd expect it will fill up.  Get information and buy tickets here. 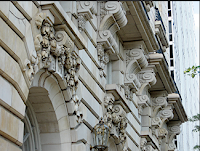 Then in May, architectural historian Sally Kalmbach will be offering From Grand Mansions to Luxury Apartment Buildings, The Story of the changing skyline of Lake Shore Drive, covering both the buildings, residents, and the architects, with an emphasis on Benjamin Marshall.  The tour is being offered Saturday May 19th and Wednesday May 23rd, both times from 10 a.m. until noon.  Cost is $25.00 per person.  For more information and to reserve your place, contact Sally Kalmbach via email. 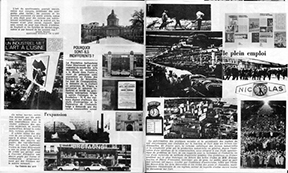 And just to prove it's never too late to add to the April 2012 Calendar of Chicago Architectural Events, on Tuesday April 24th, 6:00 p.m. at the Graham, there's a lecture by Craig Buckley of Columbia University's Graduate School of Architecture on Utopie: Encounters and Missed Encounters, followed by an open discussion moderated by Sara Knox Hunter.

Elsewhere this week, there's Digital Design at SOM at the Arts Club on Monday the 23rd, Peter Skosey discussing Bus Rapid Transit: Chicago's New Route to Opportunity, CAF lunchtime on Wednesday the 25th, SEAOI's Midwest Bridge Symposium, ULI Chicago's Rebirth of the East Loop and State Street, and Gunny Harboe's tour of Unity Temple, all on Thursday, the 26th.  And on Saturday afternoon, April 28th at the Hyde Park Art Center, there will be a "public memorial celebrating the life and work of visionary architect Doug Garofalo."

Check out the dozen events still to come on the April Calendar.