Crain's, Chicago Tribune add their voices: Prentice Should be Saved

The headline in this week's Crain's Chicago Business sums it up succinctly:  Prentice should remain part of Chicago skyline.  The editorial rebuts Northwestern University's current full-press PR campaign to convince the public that, even with a two-block square lot across the street that has been nothing more than a chain-linked gravel pit for over three years, the University has no alternative but to destroy Bertrand Goldberg's spectacular 1975 Prentice Hospital. 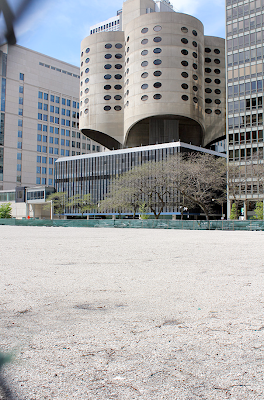 "In our view, the university hasn't made the case that the structure can't be preserved," says the editorial, and it notes that "Northwestern hasn't even retained an architect, which creates the prospect that the city could trade this gem for yet another utilitarian edifice on the medical campus."

That point is tellingly reinforced over at the Chicago Tribune by Cheryl Kent, who, with Ron Grossman, is taking over the paper's architecture beat from Pulitzer Prize-winning critic Blair Kamin while he's away on a fellowship.  Kent chose to use her debut piece in her new role to counter the Trib's editorial board's gleeful pandering to Northwestern's lust to trash Prentice into dust. 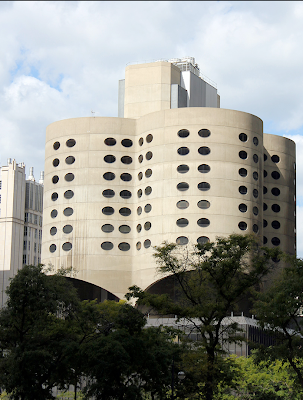 "Northwestern," writes Kent, "has inadvertently provided proof of Prentice's uniqueness by way of its mediocre replacement, the new Prentice, a boilerplate building that is inhuman in scale and tedious in design."

Has the Trib buried Kent's piece?  It carries an August 24th dateline, but unless I'm blind - always a possibility - I was unable to find it in the print editions of Friday, Saturday or Sunday. (Maybe it'll be in tomorrow.)  The title of the webpage Why Prentice should be saved, is much less ambiguous than the vague headline.

Kent lays out the truth that Prentice meets at least three - probably four- of the criteria required for designating a structure an official Chicago landmark, and calls out Northwestern for its power play politics, "If Prentice is demolished, it will be for reasons other than its worthiness as a landmark."

This is a key point often overlooked.  To Northwestern, this is not about a building, it is about power.  Northwestern is at the top of Chicago's power elite.  It does not like to be challenged.
Its public advocacy campaign to destroy Prentice is so sloppy and factually challenged that it seems almost half-hearted.  (The Chicago Sun-Times David Roeder calls it, "an embarrassment for a school of Northwestern's caliber.")  Northwestern wants it gone.  That should be enough.

More importantly, Northwestern has deliberately subverted having a debate on Prentice in the forum where it would be most appropriate:  The Commission on Chicago Landmarks. 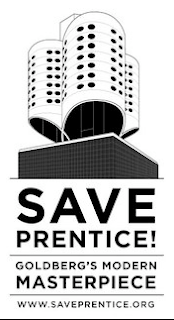 In June of 2011, the matter of Prentice made its way onto the Commission's agenda. As Kent demonstrated, if any Chicago building meets the criteria, it's Prentice, and any neutral debate would most probably result in Prentice's designation - and protection - as an official Chicago landmark.  Northwestern, of course, can't have that.  So they used their clout to have the matter pulled from the agenda, and have kept it off, month after month, ever since.

According to a report in Skyline, when preservationists who are a part of the Save Prentice coalition tried to  bring up Prentice at the Landmarks Commission  meeting earlier this month, Commission Chairman Rafael Leon cut them off.  "At the appropriate time, then you can make your statement."  And when, actually, would be that time?  "I don't know, to be honest."  Even as Commissioner, Leon apparently has zero control over his own agenda; he just follows orders passed down by the Department of Development.

For 15 months, the administration of Chicago Mayor Rahm Emanuel, has enforced an official omerta on the fate of Prentice.  What actually have they been talking about?  Wars have been settled in less time.   Are they really talking at all, or is Northwestern simply deploying its clout to make sure there is no talking?

In June, the Martin Schnitzius Cottage got the Landmarks Commission nod for official designation.  Now well into the second year, Bertrand Goldberg's Prentice Hospital can't even be discussed.  It may be classic Chicago politics, but that doesn't make the city's subversion of due process to placate clout-heavy Northwestern any less of a scandal.