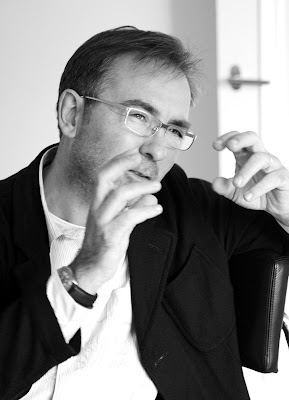 As we reported on Friday that Edward Lifson had reported on Thursday, IIT has now made the official announcement that Wiel Arets is the new Dean of the College of Architecture.  As the press release reads:

Illinois Institute of Technology Provost Alan Cramb announced today the appointment of Wiel Arets as the new dean of the IIT College of Architecture. Born in the Netherlands, Arets, an internationally acclaimed architect, educator, industrial designer, theorist, and urbanist, is known for his academic progressive research and hybrid design solutions. He is currently the professor of building planning and design at the Berlin University of the Arts. His architecture and design practice, Wiel Arets Architects, has multiple studios throughout Europe and its work has been nominated for the European Union’s celebrated ‘Mies van der Rohe Award’ on numerous occasions.

Arets, who was dean of the Berlage Institute in Rotterdam from 1995-2002, will join IIT this fall and will lead an academic program originally shaped by the vision and work of Ludwig Mies van der Rohe. Considered by many to be one of the founders of modern architecture and design, Mies chaired the IIT architecture program from 1938-1958 and  designed the IIT Main Campus, home to many of his iconic structures including S.R. Crown Hall.

Arets currently has projects under construction throughout Europe and Japan, including the Allianz Headquarters in Zürich, Switzerland, Amsterdam Centraal Station’s IJhal, the Schwäbischer Verlag in Ravensburg, Germany and the A’ House in Tokyo. His many distinguished projects include the library on the Uithof campus of Utrecht University, the Academy of Art & Architecture in Maastricht, the Euroborg Stadium in Groningen, and the Hedge House in Wijlre, the Netherlands.
“The College of Architecture at Illinois Institute of Technology has a global reputation and attracted outstanding candidates for dean from leading programs worldwide. It is indicative of the position of the IIT College of Architecture that we have found such an accomplished architect to lead the school in a new direction,” said Cramb.

Arets has been a guest professor at many of the world’s preeminent architectural universities, including the AA London, Columbia University and Cooper Union—and served on the Advisory Council of Princeton University from 2003-2012. He graduated from the Technical University of Eindhoven in 1983, where he obtained his Master of Science in Architecture . . .