River North Hotels - One Sleeks Up; One Dumbs Down

The last time we looked, in 2009,  at the design (from HOK Architects) of the new three hotel complex on Clark Street between Illinois and Grand, the Clark Street facade of the Aloft Hotel had been changed from masonry and glass, to a glass curtain wall.  Well, that curtain wall is largely in place, and it's a definite an improvement on the original putty-colored verticals, with super-transparent zig-zags interspersed among the other glass of the facade. 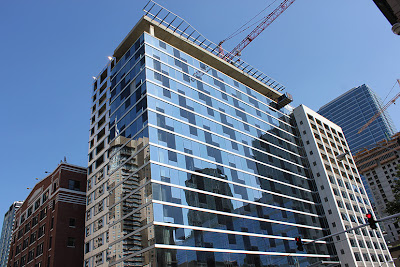 Is it too much too hope that the mud colored surfacing of the easternmost portion of the building will be left a lighter color, closer to what you see now?  As it is, the dramatically cantilevered topmost slab of the original design and the glass cornice of 2009 seemed to have both bit the dust in favor of a far more conventional slab with a - at least at the moment - rather forlorn looking trellis sticking out from it. 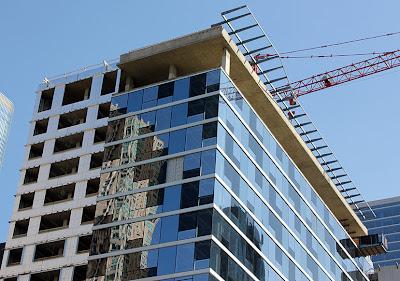 The transition on the Hyatt Place next door, at Clark and Illinois, is less felicitous.

Either the Aloft got shorter, or the floors in the Hyatt Place got taller.  What was a 15-story building,  shorter than the Aloft and topped with a slopping, windowless service block on top has become a 15 story building that shares the same cornice height as the Aloft.  On Clark street, the 2009 tri-partite arrangement for the Hyatt Place facade, with a rhythm of 3-2-3, has disappeared, replaced with a uniform omni-grid, from eight windows and four verticals, to five larger windows and six verticals. 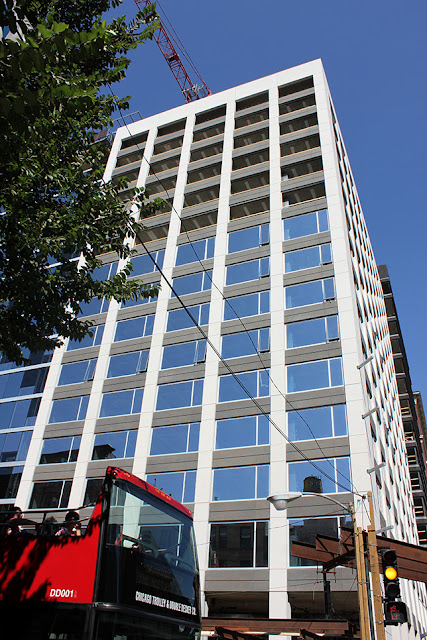 The verticals, rendered in 2009 for each floor as either four separate pieces or scored to look like it, are now a single piece.   The eight-piece gray insets that were on either side of the two three-window sets  have disappeared entirely.  The windows now spread flush to the verticals.   The spandrels, rendered in 2009 as continuous white horizontals, eight pieces above each 3 window set and six above the two, are gone, replaced by two gray spandrel panels beneath each window, recessed within the white verticals on either side. 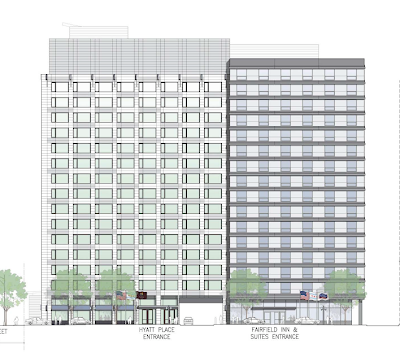 The Illinois Street facade has undergone a similar simplification.  The two-dimensional grid of the 2009 design, with its intimation of multiple pieces, now simply extrudes the Clark Street grid around the corner: strong, continuous verticals, cladding for each floor in single pieces, and recessed gray spandrel panels.  For some reason, the operable windows,  to the left in 2009 rendering, have all shifted to the right as-built. 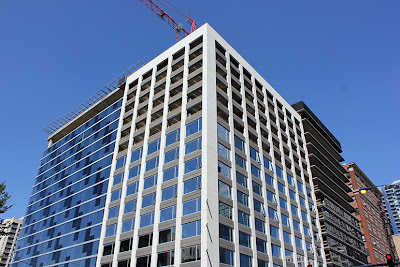 "God is in the Details", someone once said, and in Hyatt Place, that God apparently had to be sacrificed.   The final result looks rather cheap, less like a luxury hotel and more like a Class B (or C) office building. The Fairfield Inn next door is less far along, but seems to proceeding more to the original plan.

The eastern section of the Aloft along Grand seems to have nice proportions for the fenestration...an homage to the Chicago window, perhaps?