We last wrote in October about plans for 618 South Michigan, home to the Spertus Institute until that institution moved into the stunning new home next door,  designed Krueck and Sexton.
618 originally had the standard Burnhamesque terra cotta facade.  You can see it here in a vintage photo from John D. Cramer's HPRES-ist blog.  It was designed by Zimmerman, Saxe and McBride and after its 1913 completion, it went through a series of name:  The Petroleum Building, the Dennehy Building (afters its developer), the Barnheisel (after Frederick R. Barnheisel, President of H.H. Kohlsaat, the company that claimed to have invented the lunch counter) and The Arcade Building.

That facade was replaced in the 1950's when IBM took over the building, with a tight grid of a glass and steel curtain wall that better fit in with it's tenant's ultra-modern branding.
Columbia also owns 624 South next door, perhaps best known for the huge, ovoid Torco sign that long stood at its crown. 624 South, acquired by Columbia for $8 million in 1990,  was built in 1908 as the home of the Chicago Musical College for the schools' founder, Florenz Ziegfield, Sr.   The original design included an 800-seat theater, the Ziegfield Picture Palace, which was destroyed when A.S. Alschuler added seven stories to the structure in 1922 for H.H. Blum's expansion of "Blum's Smart Shop." 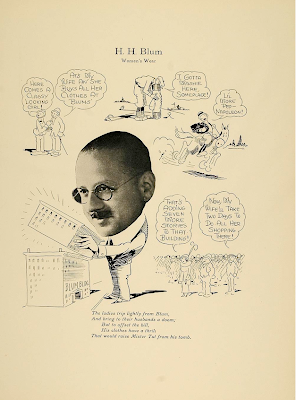 After 76,000 square-foot 618 was acquired by Columbia under the direction of former Chicago planning director Alica Berg, now Columbia's VP of Campus Environment, the 1950's curtain wall was found to be crumbling.  Gensler was called upon to come up with the replacement, and under Regional Design Leader Elva Rubio the idea was hatched to make the few facade a mediation between Krueck and Sexton's cutting-edge sculpted steel and glass to the north and Eckstrom and Alschuler's classically-styled masonry cladding to the south. 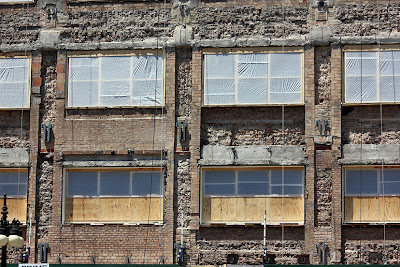 While Gensler's new curtain wall is as structure-spare and glassily sleek as the Spertus, it's also  been designed with a "ghost image" of the building's original terra cotta facade, digitally printed as a ceramic frit placed between the dual pane glass, which Berg, in an interview with the Columbia Chronicle, claims is a first in the U.S.. Not only does the new curtain wall provide a major boost in energy efficiency, the fritting is expected to flatten the transparency of the facade just enough to discourage the usual carnage when migratory birds try to fly through hyper-transparent glass. 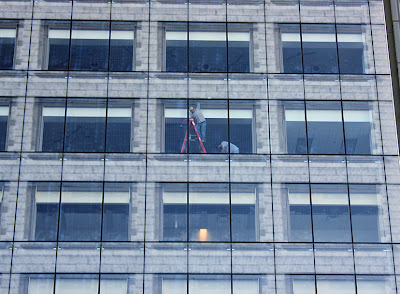 In its master plan, Columbus noted that the similar floor levels between 618 and 624 allow it to expand its library across both buildings.  Already, Columbia has created a new gallery space on the 2nd floor overlooking Grant Park and the lake called The Arcade, a nod to one of 618's original names.  (Gallery scheduled to re-opened September 4th.)

Obviously, the appearance of the facade will change depending on the light.  The pictures you see here were taken late afternoon.  It will be interesting to see how it resolves in direct sunlight.

Alschuler did not redesign the base. Part of the parapet he designed is now missing, which is noticeable now that the Torco sign is gone. http://umedia.lib.umn.edu/node/66899

I posted that picture on Cinema Treasures, it is from http://www.loc.gov/pictures/item/det1994021589/PP/