Portrait of a City at Warp Speed: The Eighth Greatest Film Ever? Man With a Movie Camera at Doc Films tonight 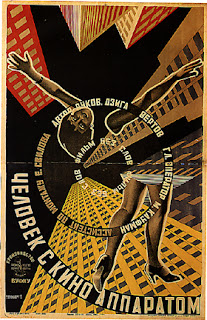 The ten highest ranked movies of the just released 2012 edition of the British Film Institute's once-a-decade poll of The Top 50 Greatest Films of All Time is pretty much a list of the usual suspects: Rules of the Game, Tokyo Story, Sunrise, Passion of Joan of Arc, etc.  The big news was dethronement of long-time Number 1 Citizen Kane with Alfred Hitchcock's Vertigo.  Discuss among yourselves.

An even greater jump, however, was a film that went from 27 in 2002 to number 8 this year.  Dziga Vertov's Man With a Movie Camera is a wildly ambitious 1929 silent documentary that is nothing less a picture of what it is to be alive as captured through documenting a day in a great city (in this case mostly Odessa, but some other cities used, as well.)  Coupled to long stretches of conventional montage are bursts of the avant garde techniques that would come to define cutting edge cinema: multiple exposures, jump cuts, freeze frames and more. 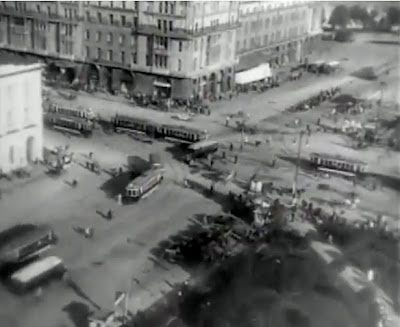 Streetscapes, storefronts, racing trains, planes, trams and fire trucks a beautiful woman dressing, trams emerging from their sheds, shooting galleries, dancers, symphonies, posters, advertisements, a walking tripod -  all the forms of urban human life, and all the stages birth to death.  In 68 minutes.

And we also see both endpoints of the story - the intrepid cameraman as he seeks and sets up his shots, and the audience watching him on film as he shoots film while riding a motorcycle. 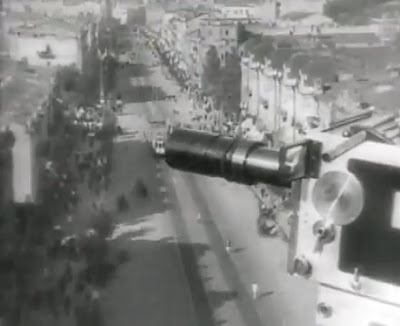 It's a remarkable study of architecture inhabited.  Not the carefully composed hero shots of individual buildings, but the fabric of buildings placed within a city, engaging with the human beings who designed them, and use them, if only as a backdrop,  Vertov's restless camera often moves through the streets just as we as pedestrians move through the streets. 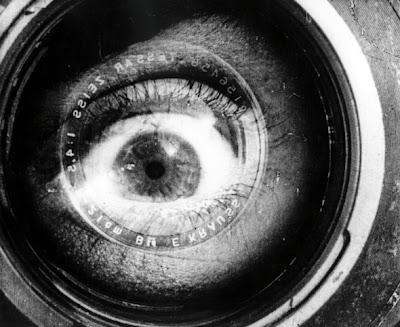 While you can view the entire film on You-Tube, tonight you also have a rare opportunity to see Man With a Movie Camera as it was meant to be scene, on a large screen - where the images of buildings can scale life-size - and with an audience, so you can be a spectator in a theater watching an audience in a theater watch Vertov's film.  It screens tonight at 7:00 p.m. at doc films. in the Max Palevsky Cinema at Ida Noyes Hall at the U of C, 1212 West 59th.  $5.00.

Email ThisBlogThis!Share to TwitterShare to FacebookShare to Pinterest
Labels: doc films, Dziga Vertov, Man With a Movie Camera, The Top 50 Greatest Films of All Time, University of Chicago