Mies: "I am not a polygamist" - so says the Digital Public Library of America

Yesterday at noon,  the Digital Public Library of America came online for the first time.

According to Harvard Librarian Robert Darnton in the New York Review of Books . . .


The Digital Public Library of America . . .  is a project to make the holdings of America’s research libraries, archives, and museums available to all Americans—and eventually to everyone in the world—online and free of charge

How to think of it? Not as a great edifice topped with a dome and standing on a gigantic database. The DPLA will be a distributed system of electronic content that will make the holdings of public and research libraries, archives, museums, and historical societies available, effortlessly and free of charge, to readers located at every connecting point of the Web.

So, at least in its initial iteration, the NDPL isn't creating new digitized content itself, but is, instead, a kind of digital clearinghouse, drawing on already existing resources.  It looks to pick up where Google's failed Google Book Search project, and allows you to search a massive - and growing - collection of sources from a single interface..

I decided to take it through its paces.  A search for ‘Chicago’ came up with nearly 20,000 items.  Not surprisingly, a large number of those items came from the digitized collection of the University Library of the U of I, Champaign/Urbana.   One of the first interesting things I came across, once I had decided to forgo, at least for the moment, 1909's The Higher Fungi of the Chicago Region,  was Marian Ainsworth White's The Book of North Shore, from 1910, a collection of photographs of the mansions that lined Sheridan Road in Rogers Park before they were almost all demolished for the current canyon of residential towers, including Frank Lloyd Wright's house for Oscar Steffens at 7631 North Sheridan, constructed in 1909, which had a long life as the King's Arms restaurant before being razed in 1963. 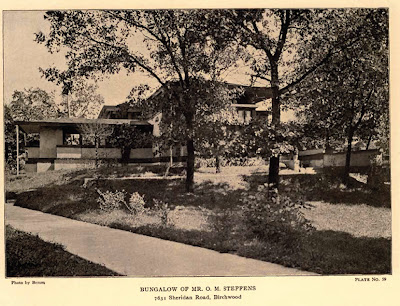 From the University of Utah's J. Willard Marriott Library, there's a set of 1911-12 photographs by Taylor Woolley of Frank Lloyd Wright's original Taliesen under construction. From the U.S. Department of Labor collection, there's a 1920's photo of Oak Street beach overrun with bathers . . . 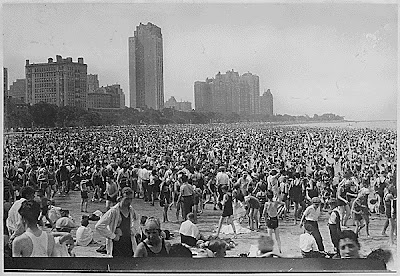 There are any number of books published to take advantage of the 1893 World's Columbian Exposition . . . 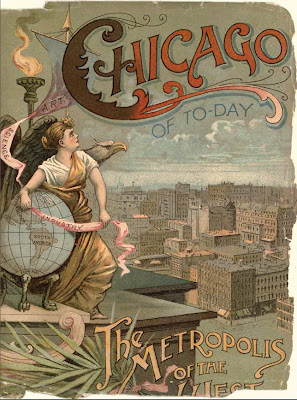 and a snuff box with the Agriculture Building on its cover . . . 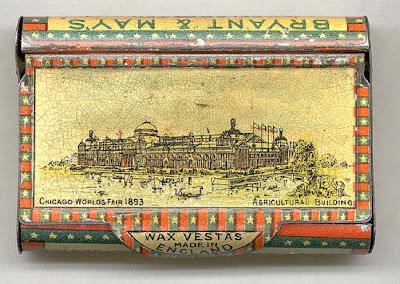 There are books that compile information on hundreds of Chicago companies which long ago disappeared from existence . . . 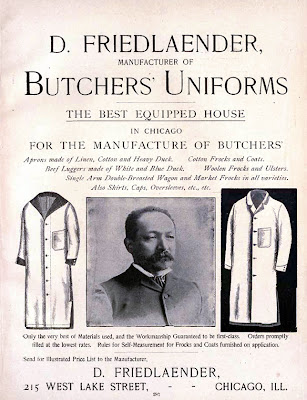 From eighty years before the monorail at Disney World, there's the Forsyth Elevated Suspension Railway.  Labeled a “radical departure’, it appear to have never left the station.

. . . and, from the National Archives, we have the paperwork surrounding Mies van der Rohes emigration to America, including the certificate of arrival on August 29, 1938 aboard the SS Europa, and his Declaration of Intention to become a citizen, in which Mies attests that he is neither an anarchist nor a polygamist . . . 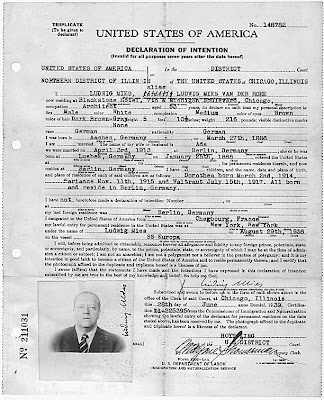 His Petition for Naturalization, including his oath of allegiance, is signed in spare and clear Miesian style . . .

The DPLA has been structured as an open platform, encouraging developers to create apps that interact with the metadata in new ways.  There are only two apps listed on the site currently, but one of them, Search DPLA and Europeana, allows you to search, in one place, not only the DPLA but Europeana,  which includes millions of digitized items from European museums, libraries and other collections.   Stay tuned.