The paper's Ron Grossman and Cheryl Kent have done a bang-up summary of the clout-ridden process that doomed the landmarking of Bertrand Goldberg's Prentice Hospital.  If you're one of the Trib's pathetic handful of digital subscribers (half that of the Sun-Times), you can read it.   For anyone else, it's carefully stuck behind their paywall.

Even if you don't read the Trib, it's well worth picking up  a copy today. (Try not to be shocked by the fact that the Trib just raised the price a whopping 50%, to $1.50.)  When politics get in the way doesn't really include anything we haven't written before in our own copious coverage of the battle for Prentice, but it fleshes out the details and mechanics of how the good-old-boys-network that runs the city - of which the Trib, which shilled relentlessly for Prentice's destruction, sees itself as a key member -  circles the wagons to support its own, in this case  Northwestern University, who has turned their substantial chunk of Streeterville into a kind of high-tech colonial plantation where the rules that constrain all the rest of us don't apply and truth is whatever they want it to be.

Grossman and Kent document how Chicago's Department of Housing and Development simply dumped facts and figures they got from Northwestern into their report calling for Prentice's demolition.  Nothing was vetted or substantiated.  The Commission willingly became part of Northwestern's propaganda machine.
In its portrait of Landmarks Commission Chairman Rafael Leon, the article is especially damning. ”I personally don't know all the details,” Leon told them, “We believe Northwestern.”  Leon was part of a cynical remaking of the Commission by Mayor Rahm Emanuel that dumped four commissioners and stuffed the body with connected associates, none of whom were architects, in direct violation of the directives of the Landmarks Ordinance.  Among them was former Cook County Assessor James Houlihan.  According to Grossman and Kent, he's also a senior consultant with a firm that brags about lobbying the city on behalf of over 25 clients.  Christopher Reed, the only commissioner to vote against demolishing Prentice, quit. “I was disgusted,” he told Grossman and Kent, “The process was hijacked by City Hall.”

Grossman and Kent underscore the uselessness of these appointed bodies.  As with the Plan Commission - which began as independent entity - the concept is that they provide an essential check on city government, representing the larger public in objectively vetting important city actions.  That role has long since been abrogated.  They have become rubber stamps that never - and I emphasize never - do anything other than follow the scripts they've been handed by the mayor.  At a time when the city is closing schools for lack of money, a Landmarks Commission that is nothing more than an expensive extension of the mayor's PR office is a pointless luxury we can no long afford.  Keep the staff; abolish the Commission. 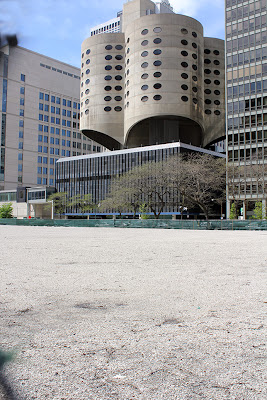 Great summary. You can read the article in a pdf at:

Fantastic article. It's not behind a paywall, a free account will let you in.