Saturday, was the first bridge lift of the season. It's one of Chicago's great rituals, the great bascule bridges over the Chicago river rising up like awakened giants to the sound of unseen motors revving and giant gears straining, and of the bells . . .

Poe would have had a field day on a morning like this, standing on the side of the river, composing another stanza to his famous poem as the infernal, relentless clanging bore a hole into his cranium.
There used to be a guy from CDOT, a short and corpulent Napoleon of the bridge lifts, who would break up the monotony by screaming insults at pedestrians who weren't clearing the walkways fast enough for him.  I haven't seen him for a while.  This morning, the only relief from the frenetic ding-ding-ding came from the honking of a pair of displeased geese. 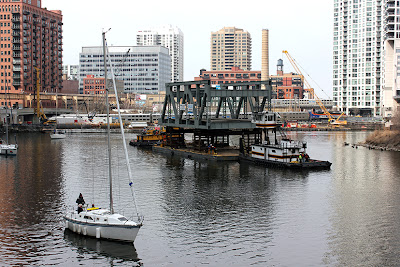 The inaugural armada passing through the spans today was, truth to tell, rather pathetic in number, but it was upstaged by a spectacular centerpiece, a couple of tugs guiding down the river a giant barge containing the replacement northern span for the Wells Street Bridge, next to which it will remain docked until April 26th, when work crews will begin disconnecting the old current span, and floating it out the way.  Then the barge with the new segment will be moved into place, and the workers will begin connecting it in place, with the job scheduled to finish by May 6th. 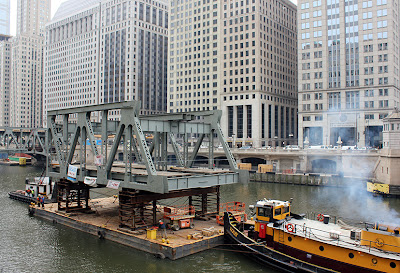 Read:
The Bridge On Beside the River Chicago - Reconstructing Wells Street
All Quiet on the Wells Street Front
(Click on time for permalink) 3:36 PM

Your highlighting this event was great – the city should make this a special annual celebration to highlight the advent of spring and the beginning of Chicago's fabulous summer season.

Miami may own winter, but Chicago should own summer!