Are we exhausted, or just older and wiser?

Once upon a time, great cities built epic infrastructure.  At the turn of the 20th century, this meant such boodler visionaries as Charles Yerkes creating Chicago's first ‘L’ system. By mid-century as government had taken over, it was O'Hare airport and the game-changing  expressways that carved up neighborhoods like so much deli meat.  In dreams begin nightmares.

In World War II, the U.S. Army Corp of Engineers coined a famous motto: “The difficult we do immediately. The impossible takes a bit longer.”  Today, shell-shocked by - what:  failure? decline? the death of the public realm? - our best answer too often seems to be a defensive, “We're working on it!”  New York City began digging a new Second Avenue Subway in 1972.  After numerous false starts, if they're really lucky, the first phase may open in 2016, 44 years later. 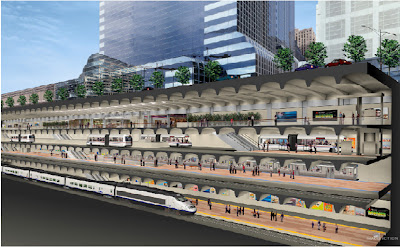 Sometimes, however, a little delay is a good thing.  It was enough to kill off enthusiasm for a Crosstown Expressway that would have slit open neighborhoods north to south throughout the city.  Similarly, delay seems to have also back-burnered an idea from the revised Chicago Central Area Plan, issued early last decade, that everyone seemed to have been swallowing hook, line and sinker: a West Loop Transportation Center that would burrowed commuters like mole rats down into no less than four subterranean levels beneath Clinton, at a hallucinatory low-ball estimated cost of $2 billion.

You don't hear much about the West Loop Transportation Center these days, especially after the CTA buried $320 million of your tax dollars under Block 37 in a “superstation” abandoned in 2008 when the CTA conceded it couldn't see any other light at the end of the tunnel than an all-consuming flame of never-ending cost overruns. 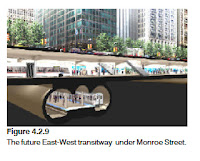 Less remembered was a Central Area Plan proposal for a new below-grade transitway from Michigan Avenue to Clinton, running under Monroe Street in a right-of-way the city had reserved for a new distributor subway back in the 1970's.  The estimated price tag of $200 million seemed a bit optimistic.

Now there's a new buzzword:  Bus Rapid Transit (BRT).  That's right: we don't need no stinkin’ electrification.  No tracks.  No expensive burrowing.  You simply seize lanes of existing streets and dedicate them to the exclusive use of buses. 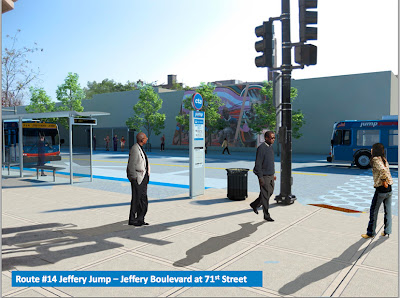 Recently, the CTA entered this brave new world - gingerly - with the Jeffrey Jump, an express service that runs from Ogilvie and Union stations to 103rd street in as little as 46 minutes.  Most of the speed-up comes from limited stops and no stops at all along a seven mile segment from 11th to 67th.  The route has access to dedicated bus lanes only from 67th to 83rd, and only during rush hours.  Traffic signals have been reconfigured to favor the buses at just one intersection. 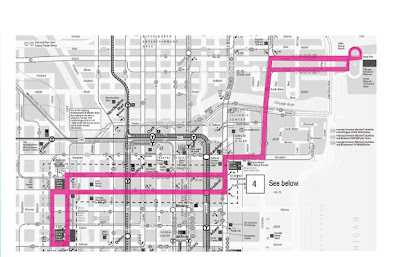 The CTA is now getting ready to bring BRT downtown, with its Central Loop East-West Corridor.  Instead of a Monroe Street transitway, the corridor will create a two-mile, BRT loop connecting the commuter stations to Michigan Avenue.   The CTA's proposal is really a kind of BRT-lite.  Only one segment - along Washington - will feature a dedicated bus lane.  The segments on Madison, Clinton and Canal will use “priority” bus lanes, shared with autos.  In a February press release, CTA President Forrest Claypool identified Washington and Madison as two of the agency's most heavily trafficked corridors, with buses running every three minutes at peak.   The release projects the new corridor, extending to Navy Pier, will eventually run 1,700 buses a day. 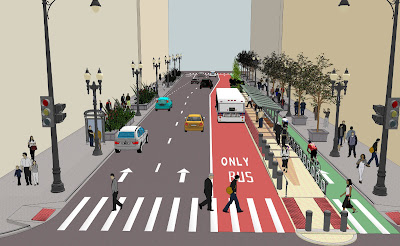 As part of the project - financed by $24.6 million from the feds and $7.3 in TIF funds - the CTA is acquiring a surface parking lot at Jackson and Canal for a transportation center that will include both a staging area for the buses and an underground passage to Union Station across the street. 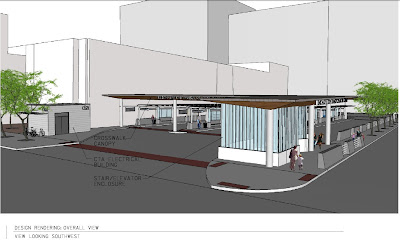 Judged from the rendering above, the transportation center, cordoned off in a stitching of ugly concrete bollards, will be a very drab affair that wears its parsimony on its sleeve even as it kicks Chicago's design reputation into the gutter. 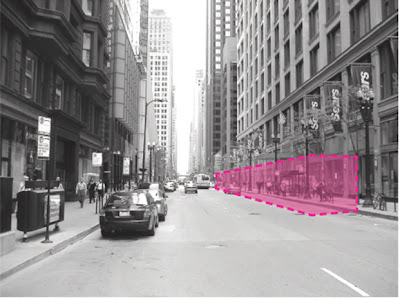 A new design competition has the potential to improve things. CDOT and the CTA have teamed up with the Chicago Architectural Club and Chicago Architecture Foundation for Next Stop: Designing Chicago BRT Stations, the 2013 Burnham Prize Competition seeking ideas not quite as dreadful as what we'll probably wind up with.  The competition offers a $3,000 first prize, $1,500 second, and $750 third.  Submission deadline is noon, May 13th; winners to be announced at CAF June 6th.  Registration is $90.00, $50.00 for students.  See all the details and download the brief here. 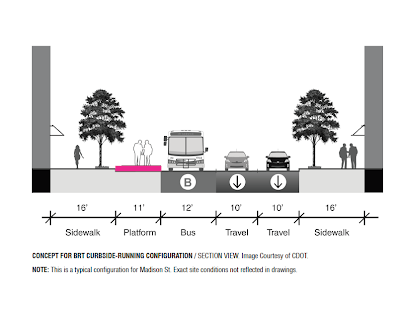 Entries must include concepts for three different BRT corridors.  That for Central Loop would be at Madison and Dearborn, and would expect to serve 4,500 riders a day, accommodating up to 40 them at a time.  A second would be for a Logan Square station along a projected Western Avenue BRT corridor, adjacent to the Blue Line stop - 3,000 riders a day, 30 at a time; a third for an Ashland BRT between 17th and 18th in Pilsen -  1,500 daily riders, 20 patrons capacity.  Goals include easy pedestrian access, pre-boarding fare collection, shelter from the elements, ADA compliance, sustainability, and - bien sûr - advertising, no doubt in remunerative abundance.

There's little doubt that the competition will bring in some very creative, well-researched proposals.  There's also little doubt that, given history, the odds are CDOT/CTA will completely ignore the results.

The last partnership between CAF and the CAC was a design competition, Future Prentice seeking reuse concepts for Bertrand Goldberg's landmark hospital building.  It got a fantastic response.  Architects from Chicago and throughout the world ponied up thousands of hours of their time, worth probably a million dollars or more, to come up with intensely researched, practical and frequently brilliant proposals that would have saved Prentice while supporting Northwestern University's long-term goals.   The operation was a great success.  Too bad the patient died.  Euthanized, actually, as Northwestern threw the portfolio of great ideas into the trash without a second look (or, most probably, even a first). 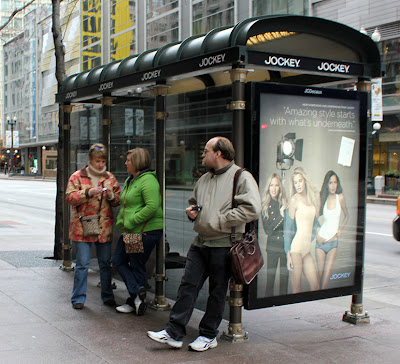 CDOT and CTA have made no visible commitment to draw upon the Next Stop entries for their actual BRT station designs.  What do you want to bet that, in the end, the advertising component trumps all, and we wind up with the entire process controlled by JCDecaux, with stations offering only slight tweaks to their graceless, thick-limbed Robert Stern bus shelters that have proven much more effective in selling advertising than protecting commuters from winter winds, or contributing anything much beyond anonymous clutter to the visual quality of the Chicago's streets?

Cynical?  I confess, with apologies.  Nothing would make me happier than to be proven wrong.  In our current constrained economy, we can no longer afford to consign architectural competitions to being a mere PR stratagem, the results applauded and ignored, a purchased indulgence for mediocre design whose sting will afflict the city for decades to come.


Gratuitous Postscript:  CDOT isn't the only one who gets to dream.  When all those billion dollar proposals were floating around a few years back for an new, far outer Loop circle rapid transit line, I imagined my own circle line, one that linked Navy Pier to the hotels and offices of North Michigan, took the Carroll Street corridor to the Merchandise Mart, south to the Amtrak corridor through Union Station using lanes created by demolishing unused baggage platforms, down to the emerging Roosevelt Road residential/commercial district, across via the St. Charles Airway, south to McCormick Place and back north to the  Museum Campus and Millennium Park using the existing Metra corridor busway, and past Lakeshore East on the way back to Navy Pier.  Dream on. 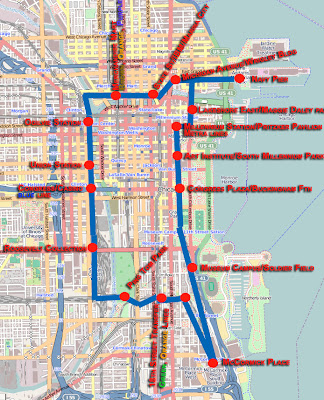 Who says CTA's design is backward? I admit under Daley it got pretty cheesy (tile skylines at Chicago/State) but under Emanuel we've gotten the stunning Morgan and equally solid designs for Cermak, Washington/Wabash, and Clark/Division.

The Union Station bus terminal will actually look pretty good, I think; blame the quick SketchUp renderings. It will certainly be nicer than the long bus shelter they built at Congress/Financial Pl.

Some pretty designs alright. Doing the painting yourselves is more fun but a good place for ideas for more design is this site of wahooart.com, that I use to help with my wall decorations.
You can browse for a painting like this The tree, by 20th century Czech artist, Frantisek Kupka, for example, http://EN.WahooArt.com/A55A04/w.nsf/OPRA/BRUE-8LHUQV , that can be ordered on line and delivered to you.