New CTA L cars may last for 40 years: do we really want to spend them staring into someone's crotch?

Yes, the picture above is a bit of an exaggeration.  The CTA isn't actually planning to relieve overcrowding by putting riders into harnesses and speeding them along conveyor belts, after eviscerating us to reduce load weight.  At least not publicly. The CTA is, however, ramping up its commitment to another rider-unfriendly ‘innovation.’

In a move to make Rachel Shteir feel more at home, the CTA is deep into the process of upgrading its fleet with new railcars that replace the (pun alert)long-standing forward-facing seats with the aisle-facing benches that have been the norm in New York City for over a century.

The new L car design is another lovely parting gift from the administration of Richard M. Daley. After purchasing zero new rolling stock since 1992, the CTA announced in 2006 that it would be purchasing 406 new rail cars at a cost of $577 million, with delivery to begin in 2009. 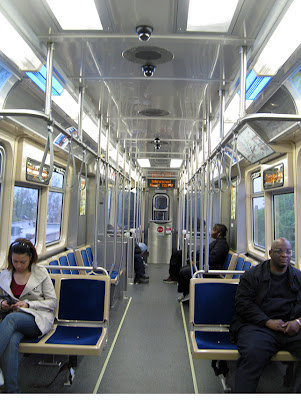 When the first new 5000 series cars actually began appearing in 2011 on the Pink, then the Green lines, they offered up smoother rides, ADA compliance, brighter lighting, security cameras, and nifty station maps where the dots representing the stations light up when a train approaches.  That didn't stop many riders from expressing strong negative reactions to the layout, to which the CTA responded with its usual raised middle finger.  The cars, it said, had been engineered to only accommodate aisle-facing seats - so shut up and take a seat, if you can find one.

In February, the CTA announced they were opening the bidding process to find a manufacturer for a new 7000 Series of "L" cars - 846 cars, at a cost of $2 billion.  As part of the process, the CTA has set up an on-line user survey, which you can access and take here.  ‘Do you prefer to sit or stand during your journey?’ it asks after getting past some preliminaries.  Then it's your preferred clinging strategy: pole, strap, seat back, or the person you apologize to after you use them to catch your fall.   Finally, it moves on to placement, starting with the old forward-facing seats, before moving on to 5000, mainly inward-facing seats.  14 screens of questions in all.

This is actually a lot more user input than the CTA has ever sought before. “This is the first design I am overseeing,” President Forrest Claypool  told the Trib's Jon Hilkevitch, “and we are going to do the type of research to get it right." Still, it's easy to fear the CTA is testing the waters for even more depressing changes, such as the painful-looking blue plastic benches pictured below . . . 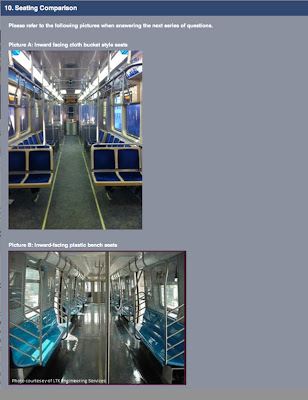 Not that passenger comfort was ever Chicago transit's primary concern.  Charles Yerkes, the man who built the original L back in the 1890's,  once famously said, “The short-hauls and the people who hang on the straps are the people we make money out of.”  But not even Yerkes imagined he could get away with turning his riders away from the windows.  His original wooden cars established a basic layout that was still being followed in later decades . . .
Those original cars offered 52 seats, a number that held pretty much steady for the better part of a century.  The new ones are down to 38.  By increasing standing room, the capacity of the cars is now estimated at 120 passengers, far above the CTA's own de-crowding goal of no more than 75 people per car.

There are, to be sure, a lot of people who think comfort is expecting way too much from the CTA. “If it gets you from point A to point B and you don’t end up dead when you’ve reached your destination then it’s done it’s job effectively,”  one vociferous defender of the new car design proclaimed.

Still, I think it's an issue worth raising. And I'm not alone. “I think as other modes of transportation become more comfortable, it’s a shame that the CTA is taking a step backwards with fewer seats. It reinforces the notion that transit is inherently uncomfortable,” Joseph Schwieterman, director of DePaul University’s Chaddick Institute for Metropolitan Development  told Carolyn Suhr of Medill Reports. At a time when we're trying to get more people to use mass transit, Chicago's ‘sell’ almost seems to come down to:  “The CTA - what other choice do you have?”
Economics and logistics obviously have a major, quite possibly decisive role in this, but it's also about what kind of city we want Chicago to be.

New Yorkers pride themselves on taking in stride all manner of daily affronts and injuries that would send lesser urban dwellers fleeing to the suburbs like whipped dogs.  New York is so full of amazing things; it's just the price you have to pay.

Chicago has its own store of wonders.  If it doesn't match the Egyptian scale of New York, it also comes with a more relaxed idea of a city that can be vibrant and creative without so easily resigning itself to the kind of  ‘Little Murders’ dehumanizations that arise out of New York's staggering density.

For most of Chicago's history, the L was a great way to see the city.  For me, it was a daily, ever-changing classroom of the city's architecture and history.  Now, it's all about avoiding eye contact with the passengers sitting directly across from you, even as you enter into an intimate visual relationship with the crotches of those standing mere inches from your face.

The purpose of mass transit is to transport people, but the increasing dependence on subsidiary revenues often marginalizes the passenger. Are windows now just a surface to attach ads to, so that looking out is like viewing the world through cataracts?  Do trains exist for the passenger, or to provide advertisers an audience, even if it means leaving riders sometimes feeling as if they've been dropped into a vat of orange juice? 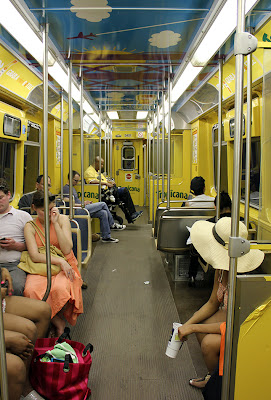 The designs that were the norm for the better part of a century carved small refuges of individual, private space within the uncaring anonymous enormity of the public realm.  There was almost a Noah's Ark vibe: two-by-two, husband and wife, mother and child, friends, lovers or your impromptu partner, just for the ride.  The oldest even had seats that pivoted direction, so a party of four could have its own facing space, chatting or perhaps playing a game of cards on the long trip into the city.  Now it's all about moving the widgets in and out with a minimum of friction.

You could make the argument that these are pretty petty complaints  You could observe that with our iPads and earbuds, we've already disengaged into our individual, virtual worlds.  But do we really need the CTA to reinforce this?  Chicago remains a city of marvels.  Is it unreasonable to want to be able to see them as they pass by?

In our Age of the Supply Chain, efficiency is the deity that brooks no appeal.  A train, after all, is nothing more than a machine to get us to where we want to go.  Yet it's also where we spend an hour or more of every working day.  When we look back on our lives, what carries the greater emotional weight: the destination or the journey?

For me, the issue isn't so much inward-facing seats as it is the space in between those seats. London has inward facing seats and I've never felt cramped in between two normal sized people. It's nearly impossible to fit my butt in between people in the 5000 series cars. When seats were situated in pairs at least you can lean one way or the other. When they are all on top of each other you have no way to avoid physical contact with the person next to you. Then at the end of the car there is an extra foot or two of space after the bench. Why not distribute that space in between seats and give us each an inch or two?

The London, Paris and NYC subway systems run 90%+ underground, there are only dark tunnels between stations; so, it makes sense for them to have inward facing seating and ignore the windows. The Chicago system, however, being mostly elevated, offers an amazing view of the city from its windows to each commuter; that is a crucial factor that has to be considered before deciding on a radical layout change. Now, one could argue that with the new inward seating layout, most people will be standing but looking out the window and enjoying the views during their rides. Tough decision !

I think the aisle facing seats is a sign the city is waking up. It's about efficiency and getting the most out of a car as you can get. If you want to see the city, take an architectual boat tour. When I visit London and NY I love the aisle facing seats. I never liked our seating situation. And when people say the seats are smaller, they are not. They are the same exact bucket seats as before. The bench seats on the other hand would be the best. To me that would acomadate the heavier people.

It is far more frustrating when I cannot get onto a train, then when I cannot find a seat that affords me a view out the window. That being said, the flow of passengers on the 3200 series better encourages riders to squeeze in during rush hour. The open areas towards adjacent to each door, the perceptually wider aisle between the single and twin seats, both encourage riders to move away from the door, which in turn allows more riders to board during rush hour. And if you have ever ridden during rush hour, you understand why this is important. If more standing room capacity and a better flow of passengers could be designed, I would gladly embrace that design. In that context the 5000 series is a godsend to commuters when it means fewer 2200 series cars, which make commuting on the Blue Line a cramped experience at rush hour.

I prefer the NYC style train. In NYC I never have trouble getting on or off the train because people get on the train and move into it, they don't get on and stop and block the doors the way people do in Chicago. So I'm all in favor of getting rid of the seats and metal panels that create an entrance foyer for people to stand and congregate in like the CTA has now. And I like the plastic seats as I'm sure its easier to clean and dry. All too often when its raining or snowing out I find the CTA fabric seats on the trains and buses are a bit moist. And do they ever clean that fabric?

What the CTA cars need are more doors to get in and out. Speed up boarding and exiting. I say three doors on each side instead of two on each side.

Quit comparing the aisle facing seats to NYC and London. Those cars are much wider and allow more room for standing people to move down the aisle without tripping over feet. As mentioned here, the 3200 series seating is the best compromise. There is much more aisle room as there are no feet to step on and trip over. I've noticed more door blockage on the new 5000 cars than on the old 2600 cars.

Very well written, Lynn. You summed up all of my frustrations with the new cars. Something is wrong when I am happy to see a 35 year-old train pulling into the Red Line station instead of the brand new $1 million-plus car train.