Return of the Flown Gargoyles

One of the amazing thing about old skyscrapers are the details the architects took pains to create even when they're scarcely visible from the ground.

A case in point is Karl M. Vitzthum's Steuben Club building on Wells, now reborn as the apartments of Randolph Tower.  We related the story of its origins, decline and rebirth last week, and got an highly illuminating email - with photos - from Brett Laureys of Wiss, Janney, Elstner, the company behind the spectacular restoration of the terra cotta facades.
Laureys related the story of these striking gargoyles.  Although an integral part of 1929 building's original design, they were removed during a down-and-dirty 1960's patch-up and replaced with limestone slabs.  Working with a historic photograph, WJE had the gargoyles remade by terra cotta specialists Gladding McBean and now, after a half-century's absence, they're back where they belong, just above the equally spectacular two-story-tall flying buttresses way up at the 39th floor.
Laureys also provided some key information on the dark granite we were so critical of in our original article, which we've now incorporated into the expanded revision - with more photos: 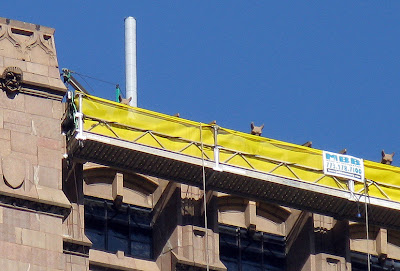 When you walk by the Ford Oriental Theater on Randolph, do you ever get the creepy feeling that you're being watched?  Well, look up . . . 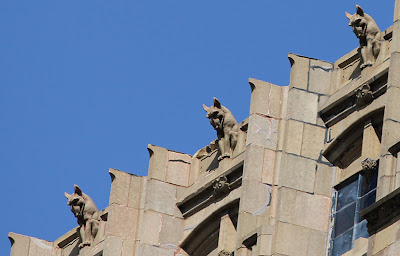 Perched 300 feet above the sidewalk, these may be the world's only guard dogs with a bird's-eye view.