Even as architects as diverse as Jeanne Gang and Zaha Hadid emerge us fully-empowered practitioners in the world of design, the barefoot and back-room status of female collaborators to famous alpha males stubbornly lingers. 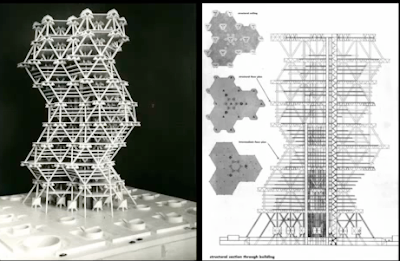 Last year, when architect Anne Tyng died, we wrote about how her collaboration with Louis Kahn on such early and innovative projects as the 1950's Philadelphia City Tower was deliberately effaced so as to humor the prejudices of the day and build up the brand.

Go back another half century, and you have the story of Marion Mahony, the woman whose striking renderings helped establish the reputation of Frank Lloyd Wright and with the conceptional drawings she created for her husband Walter Burley Griffin's clinched victory for their entry into an architectural competition for the design of Canberra, Australia's capital city.  But that's a story on its own, and we'll return to it next next.

More recently, two Harvard design students, Caroline James and Arielle Assouline-Lichten, have mounted a high profile petition drive to rectify the fact that Denise Scott Brown was left off the 1991 Pritzker Prize awarded to her personal and professional collaborator of 50 years, Robert Venturi.  As of yesterday, the petition has over 11,000 signatures from 88 countries, with a wide range of architects including Renzo Piano, Richard Meier, Herzog and deMeuron, Jeanne Gang, Zaha Hadid, Rem Koolhaas and Rafael Moneo.  (Bob Stern won't sign because he objects to the world “demand’, although he says he supports the general idea.)  Martha Thorne, executive director of Pritzker Prize, has pledged that the committee will take up the issue at their next session.  (If you're in Philadelphia this Sunday the 28th, you can hear Denise Scott Brown in conversation with William Menking.) 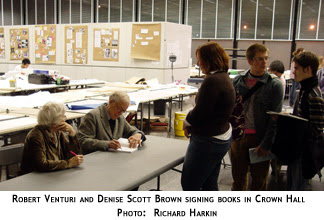 Which reminded us of the story we wrote on Robert Venturi's appearance at Crown Hall back in 2005.  At the end of the event both Venturi and Scott Brown were very gracious with their time in talking with students and signing copies of their books, but only Venturi spoke, giving an engaging talk on the different perspectives that he and Mies van der Rohe brought to architecture. 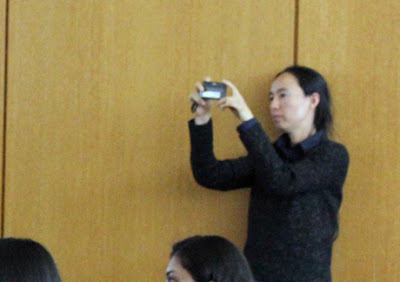 That, of course, was a very long time ago, but you still have to wonder whether we'll still be going through the same thing a few decades from now.  When Wang Shu won the Pritzker Prize in 2012, his wife and collaborator, architect Lu Wenyu, was not cited, although she co-founded their firm, Amateur Architecture Studio, and is reported to work in close partnership with her husband.  In Chicago appearances earlier this year, there seemed to be little interest in bringing Lu Wenyu into the discussions and her role appeared to be confined to unofficial photographer.