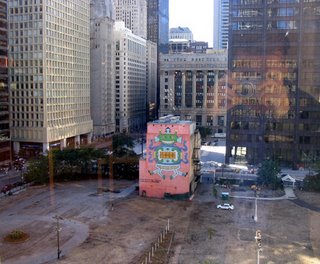 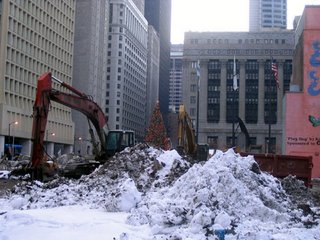 Block 37 is a prime parcel of land in downtown Chicago between Marshall Field's (soon to be Macy's) and Daley Plaza with its Picasso statue. It is infamous for having all but one of its building (a Commonwealth Edison substation) bulldozed to dust in 1989 and then remaining resolutely empty ever since, passing through the hands of several developers, as well as architects including Helmut Jahn and Solomon Cordwell Buenz.

Last November, it looked like the corner had been turned when the Mills Corporation staged a lavish party for the groundbreaking for the latest iteration of the project, which includes an office building designed by Ralph Johnson of Perkins+Will, a large retail mall along State Street designed by Gensler Chicago, and a street level studio along Dearborn for WBBM-TV designed by Jim Prendergast of Goettsch Partners. Shortly after, Mills Corporation's finances began unraveling faster than a cheap sweater, with financial regularities unveiled, key executives sent packing overnight, its German partner bailing, and Mills, itself, rushing to sell off its stake in the project. 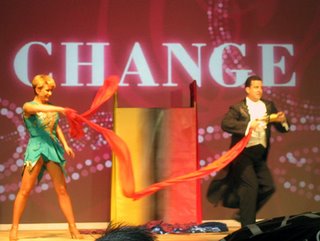 subcontractors have effectively shut down all work on the site as they attempt to force Mills to pay them in advance for their work. Also today, the Wall Street Journal has a story on an even more ambitious future project, a $500,000,000 shopping and entertainment megacomplex in New Jersey's Meadowlands, is now in jeopardy as Mills has hired investment bankers to shop itself around to potential buyers.

Last November's Block 37 groundbreaking included a performance by a magician and his quick-change artist partner. Maybe Mills should hire them back as consultants - their skills may be exactly Mills needs to get Block 37 back on track.

Block 37 was clearly meant to be part of a larger Daley Plaza, and I am quite certain that the developers and/or the mayor (or both) knew that, which was why it was the ONLY lot in the loop with an 8 foot high sight-proof fence. Consider: for a time you there was a walking path, and also a skating rink: why would either need a sight proof fence, unless you didn't want people inside or out to see how well the space integrated with Daley Plaza next door?