A reminder that this evening, Thursday, January 25th brings the announcement of the 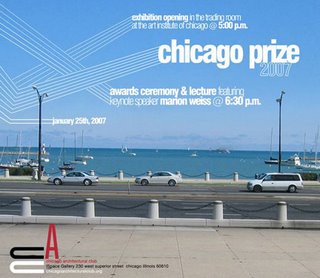 winner of the Chicago Architectural Club's 2007 Chicago Prize competition, Crossing the Drive, for the proposal to span Lake Shore 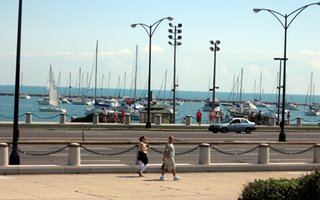 Drive at Queen's Crossing, just east of Buckingham Fountain, which the city arbitrarily shut down without notice a little more than a year ago.

Beginning at 5:30 P.M. over 80 entries will be on display in the Louis Sullivan Trading Room on the Columbus Drive side of the Art Institute. If the results are anything like the CAC's previous competition on the re-use of the city's water tanks, we're probably in for a rich range of proposals from firms all across the world.

The jury is to be chaired by Marion Weiss of Weiss/Manfredi Architects, whose spectacular, just-opened Olympic Sculpture Garden has created its own crossing over railroad tracks and a highway to bridge downtown Seattle to the Puget Sound waterfront. The Seattle Art Museum 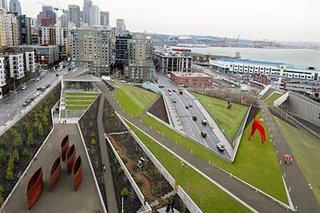 project has drawn international raves. Billionaire Bill Gates was among the throng of opening day visitors, with the Post Intelligencer reporting he proclaimed the park's vista "impressive." Immediately afterwards, an agitated Steve Ballmer was seen repeatedly jumping up and down - causing the Calder Eagle to momentarily teeter on its moorings - while shouting above the roar of traffic that future vistas would never take anywhere near as much time to complete.

Around 6:30 P.M. in the Rubloff Auditorium, Weiss will present the CAC competitions two runners-up and finally the first prize winner, who will receive $5,000. Weiss will then deliver the evening's keynote lecture.