The Chicago Olympics - A Rude Question 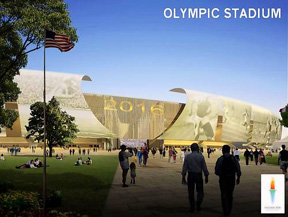 On Tuesday, the City of Chicago unveiled more details of its bid to host the 2016 Summer Olympics, releasing a number of architectural renderings, including this rather handsome one of a temporary 80,000 seat stadium proposed for Washington Park, whose estimated cost, despite a reduction in seating from 95,000, is already up $60,000,000 - 20% - from an earlier estimate just a couple of months ago.

Exciting stuff, but I still have to wonder: In a city with limited capital and huge infrastructure needs - estimated at nearly $6 billion for the CTA alone - isn't there something obscene about spending $300,000,000 on a stadium that will be demolished just weeks after its opening?

Call me crazy, but wouldn't it make more sense to spend the 300 million on a soldier field re-redo? All historic character has already be lost. Expand toward the lake... there's plenty of room to add a track & 15,000 or so new seats.

They're not gonna use tax money to build the stadium and they apparently feel it's worth it because of the legacy the games will leave behind.

I thought the exact same thing: that the phrases "$315 million" and "temporary" could only come from a politician and not a serious urban planner. I'm also wary of anyone expecting the City to actually do anything with the site once the stadium comes down. The City will run out of money to finish the post-Olympic plans, and no one will drive through the urban sniperground surrounding the area to visit an underused park and an evaporated dream.

Well Lynn, perhaps this can help explain your insipid question:

The questions isn't why is money being misappropriated, but rather why is Springfield not interested in supported the CTA with proper funding yet heartily funding new highway construction such as the 355 expansion? Isn't Chicago the central core of the whole metropolitan area? Are politicians in Springfield and even at the federal level that apathetic that they just don't care about making sure that the 2nd largest rapid transit system in the country runs the way it should?? Perhaps you should ask these types of questions before posting rhetorical gibberish, or do you just like reading what you right? That is my question to you.

I think you may wanted to post your response to the CTA article, rather than to here, so I'm taking the liberty of copying your post - and replying to it - over there.

Thanks for a good question, Lynn. You may recall the Simpsons episode in which Homer's in charge of the Superbowl halftime show, there's a throwaway line where the game announcers mention that this is the first game being played there and that it will be torn down the following week. Chicago imitates art!

If it looks like your development plan is coming from the writers for The Simpsons, is that a cause for concern?