Robin Pogrebin, the always reliable New York Times architectural writer, has a fine article this week, Rehabilitating Robert Moses on three upcoming exhibitions - at the Museum of the City of New York, the Queens Museum of Art, and 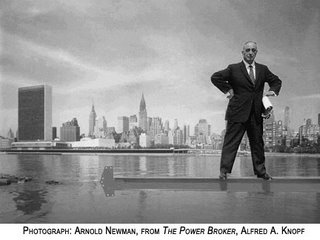 Columbia Unversity - that seek to provide a fresh look at the work of Robert Moses, the master builder of New York whose increasingly unchecked reign ran for almost four decades. (The article is accompanied by a good short video, produced by Erik Olsen.) As described by Pogrebin, the exhibitions seek to reverse the ultimately harsh judgement of writers such as Jane Jacobs, and, most decisively, Robert Caro, whose massive 1974 biography of Moses, The Power Broker, remains one of the great books of the 20th Century. The organizers of the new exhibitions apparently seek to expunge Caro's shadow on Moses's reputation, to the point of making the author a nonperson. According to Pogrebin, Caro was not invited to even one of the symposiums organized in connection with the shows.

We seem to have now reached the point where Moses has been dead long enough for people to lust after his ability to get things done, without being inconvenienced by any personal memories of the often dire results.

While Moses's life is an epic, and his personality complex and often contradictory, the trajectory of his career is simplicity himself. Moses was in his prime when he worked for master politicians like Al Smith and Fiorello Laguardia, who were the clout behind his great achievements like the the stunning neighborhood swimming pools, the hundreds of playgrounds, and Jones Beach. When Moses came up with a bonehead idea like a Brooklyn Battery Bridge that would have turned much of lower Manhattan into an the underside of an overpass, they - along with FDR - had the power to stop him. It was only afterwards, when Moses had cunningly gathered up more power than any mayor or governor, and insulated himself from all accountability, that he became essentially a rogue agent, working largely for himself. The meglomania that had previously made him so effective now turned against the city, with the mass destruction of neighborhoods for highways and megaprojects that sickened rather than healed.

It's a story straight out of Lord Acton. We still can't resist looking for the man on horseback, who will rescue us from our myriad weaknesses. But for such a man to attain full force, the rest of us must become helpless and dependent. Inevitably, he will come to despise us for it, and then, because he now believes he, himself, creates reality, he will follow his whims heedless to their consequence.