Future of Chicago Landmarking to be Decided Today?

Pop Quiz: Is this the picture of? 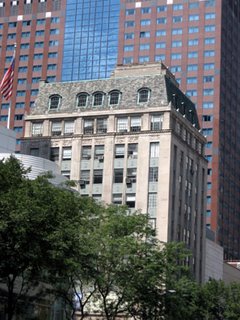 A. A Building
or
B. A Pair of Facades

A. A Protected Treasure
or
B. An Overrated Mistake

A. In Need of a Touch-up
or
B. About to Disintegrate

A. An Unusual Case Not Worth the Fuss
or
B. A Precedent that Will Gut Historic Preservation Nationwide

There are the key arguments that will come to fore when the Commission on Chicago Landmarks meets tomorrow, Thursday, January 4th, to decide the fate of the elegant 1920's Farwell Building on Chicago's Magnificent Mile, an official city landmark and the subject of a proposal to strip its facades, demolish the building, and reassemble the facades on a new structure.

I've discussed what's involved here, and the grave peril I believe it presents to architectural preservation in Chicago, here. That article provoked a great deal of intelligent discussion, and you can see the posts here.

As a postscript, I'll add the following information. The developer wants to demolish the building in order to have a launch site from which to construct a new condo tower next door. They're counting on a pair of engineering studies reporting that, while the building is structurally sound, the facades are in worse shape than originally thought, and will require too much of an effort to restore and repair. So they're asking the commission to approve the demolition of the building so they can build a parking garage for their new tower in its place.

If this proposal passes, the effects will be devastating. Other developers will demand the same consideration, and on the basis of this precedent, they will get it. Landmark after landmark will be razed as one of the world's most recognized collections of great architecture will increasingly survive only as re-assembled fragments pasted over mediocre new buildings.

The meeting is set to begin at 12:45 P.M., today, January 4th, in the Cook County Commission Board Room on the 5th floor at 118 North Clark. It is open to the public.

Hype1.com covers everything related to Entertainment and Nightlife, such as Nightclubs, Event Photos, Restaurants,Special Events, Event Tickets, Maps, Photos, Dating, Hotels, Hot Spots, Event Promoters, Fashion Shows and More! On Hype1 you can plan your night by viewing thousands of nightclubs, events and restaurants across many cities in the world. Remember , going out is easy, knowing where, is not.