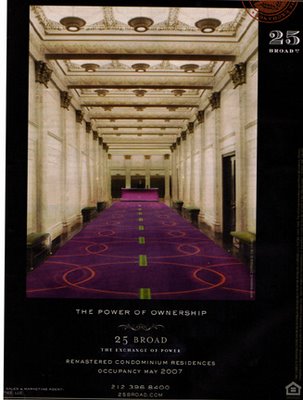 You or me, we get a unit that's renovated, but if you're really special (and really rich) you get one that's remastered. And you're not just buying the unit, you're engaging in The Exchange of Power. Which is a lot tonier way of saying here's a 1902 lux office building that's going through the mill now for a second time, having been converted to apartments in 1997 and renamed The Exchange, and where in 2006 - I guess this is the exchange of power part - the residents found that none of their leases we're being renewed so the building could be recycled again, this time as high-end condo's in the renamed 25 Broad Street. (669 square-foot 1 bedroom just $797,000) Could this be where Donald Trump learned to convert friends and associates who were early purchasors of units in his new Chicago tower, jump-starting pre-sales, into patsies from whom he invoked an obscure clause in their contracts to yank back the units and keep all the profits for himself?