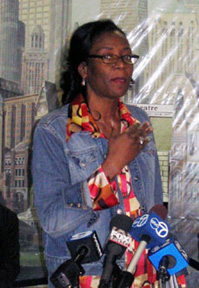 Committee on Historical Landmark Preservation, was arrested Monday morning on charges of accepting a $5,000 bribe from an undercover federal informant in exchange for a promise to support zoning changes for a shopping mall development in her ward. "Well the thing is," Troutman is reported to have told the informant according to a federal affidavit, "most alderman, most politicans are hos." Later, she's quoted as bragging to the informant how she was, “...saving him money on zoning. Saving money on all this shit. I talked to the zoning commissioner her fucking self and the planning commissioner...”

At another point, Troutman told another undercover witness that they would have to get the developer to buy 10 $1,500 tickets to a fundraiser for her 2007 re-election campaign. The affidavit quotes Troutman:

"I need you to...commit to doin’ ten Black Satins, now how you do that...” CW2 (Co-operating witness2) said, “Huh, okay.” TROUTMAN continued, “How do you do that...you go to your guy, and this ain’t in the fifteen [$15,000, unrelated to the bribe money being provided to her]. ” CW2 said, “This is just business.” TROUTMAN responded, “This is...he know fifteen muthafuckers that he go to, his builder, his 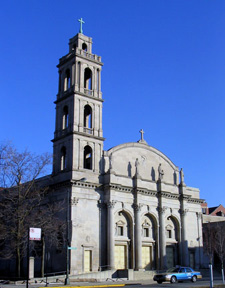 Troutman was instrumental in the succesful 2003 battle to save St. Gelasius Church in her Woodlawn community, threatening to lie down in front of bulldozers to stop demolition.

That's an interesting observation. It leads one to wonder about who are the political sponsors of each of the landmarks commission members, especially the three brand new ones who recently slipped in without much fanfare.

Also, the St. Gelasius church controversy is somewhat topical for this reason. The Catholic Archdiocese advocated demolition because they said that there were no funds to repair and maintain it. The city offered no help. Interestingly, just a few days ago, it was announced that the Spertus Center, a Jewish institution on Michigan Avenue that has enough funds to build new on the most expensive land in the city, is going to receive a multi-million dollar city subsidy.

The Spertus Center is not a synagouge - its a cultural center /museum- so there isn't a church/state seperation issue like there would have been with St. Gelasius. In any case anyone who believes the Archdiocese is short on clout in Chicago is deaf, dumb and blind. I would like to know- for instance- how they get away with maintaining St. Boniface in a manner worthy of Lou Wolf - while there are (and have been for years)willing buyers - including developers who would adaptively reuse the church and add it to the tax rolls.