Weekend Reads: Nance on City of the Future, Kamin on Valerio, Iovine on the Tribulations of Holl 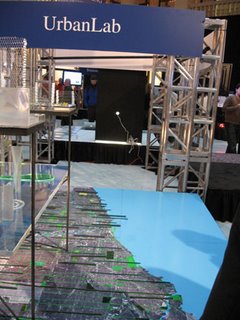 which saw UrbanLab winning the $10,000 first prize for it's proposal, Growing Water in Chicago, which draws on the fact that the great lakes account for 20% of the world's - and 95% of the United States - fresh water. Chicagoans use a billion gallons every day, only 1% of which is returned. UrbanLab envisions creating a "living system of eco-boulevards", including everything from wetlands, marshes, recreation space, even Chicago's historic interlocking system of boulevards. "As a Living System, Chicago will treat 100% of its wastewater + stormwater naturally . . . Treated water will be harvestedand/or returned to the Great Lakes Basin." The flow of the Chicago River would be "re-reversed" to again flow into the Lake, and the extensive system of huge, deep tunnels, created to hold stormwater, would be converted to transit tunnels.

Nance takes us inside the judging process, where a blue-ribbon panel that included the Art Institute's Joe Rosa and Chicago Commissioner of Planning and Development Lori Healy sift through - and comment on - entries that include everything from an elevator to space, to a city without automobiles, to a 64 lane highway.

UrbanLab now goes on to the final competition, facing off against winners of competitions in New York City (won by Architecture Research Office, envisioning a Manhattan where global warming has put most of the streets under water) and Los Angeles, (won by Eric Owen Moss Architects for a plan revitalize the east side of downtown by converting the "concrete-trapped Los Angeles River into a center for tourists and parkland.)

Check back after January 3rd for details on voting.

Kamin on Valerio
Over at the Tribune, architecture critic Blair Kamin profiles Joe Valerio, of Valerio, Dewalt Train, an architect 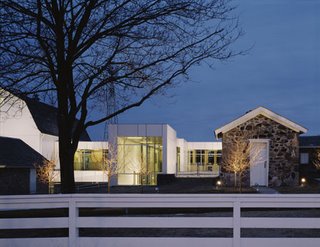 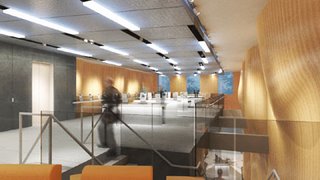 who manages to be both mainstream and quirky at the same time. "The most useless term in architecture is `timeless building,'" he tells Kamin, "which I translate into `meaningless." Valerio is coming off two major successes this year. First, a complex of office buildings on the Kresge Foundation's Troy, Michigan farmstead that the Milwaukee Courier Journal's architecture critic Whitney Gould cites as seamlessly marrying " preservation, modernism and sustainability", and which was also a 2006 award winner from AIA Chicago. Then this fall, the debut of another prime Valerio design, a new 5,000 square foot showcase for Garmin International on Chicago's Magnificent Mile, that sets off high-tech glass and aluminum with a two story wall of sculpted wood.

Valerio emphasis on cutting-edge technology (David Rasche, the firm's IT head, has 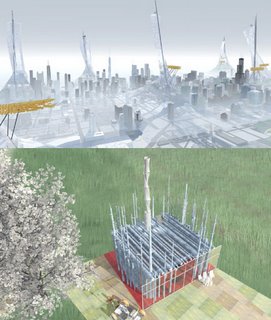 just been made a partner) was also in evidence in his entry for City of the Future, where he collaborated with the engineering mega-firm Arup to create a proposal for using 75% less energy by 2107 - none of it carbon-based - through a combination of the type of soaring, solar towers/ wind turbines he first proposed for a Chicago Architecture Foundation's Invisible City exhibition several years ago, and zero energy "houses using bioengineered trees grown in place." According to Nance, Valerio's entry was hotly debated before being edged out by UrbanLab's, but no can say that he lost because he played it safe.

Only one of the images from Nance's newspaper article makes it to the Sun-Times web site. In the hopelessly clueless Trib, not a single image from Kamin's print piece makes the cut - how can it hope to ever become an effective presence on the web when it refuses to take advantage of the internet's unique ability to post images at next to no cost compared to print, and insists on treating its web readers as freeloaders undeserving of a quality product? (Also be warned if you visit the Valerio website, it's one of those with the annoying feature of expanding your browser window to the full size of your screen, no matter how big, and then stranding the actual content in the middle amidst an empty sea of white space.)

Steven Holl looks to salvage a bad year.
New York Times writer Julie V. Iovine has an intriguing portrait of architect Steven Holl, who has undergone a number of setbacks that include an increasing rap of creating buildings that go massively over budget, and being separated in October from a project for a major new Denver courthouse. Iovine doesn't settle the question as to whether he quit or was fired, but she both interviews the architect and covers (photos included!) his recent light-box addition to the Nelson-Atkins Museum in Kansas City.
(Click on time for permalink) 12:01 PM