Five additions to the January calendar of architectural events: 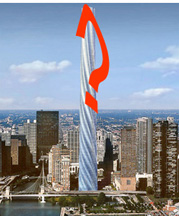 Shelbourne Development will coming in from Ireland this coming Monday, January 15th to present to the group "the latest design for the "Spire" designed by architect Santiago Calatrava." The design, reportedly a response to criticism to the less tapered design for the proposed 2,000-foot-high tower released last December, has been shopped around to community groups but has not been publicly released. Also to be unveiled is Solomon Cordwell Buenz's design for a new residential tower to be built across from Millennium Park on a corner site currently occupied by the La Strada restaurant. The session takes place at 6:30 P.M. at the Daley Bicentennial Fieldhouse.

On Thursday, January 25th, Marion Weiss will chair the jury for the 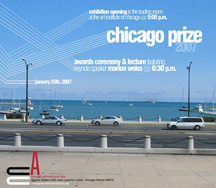 Chicago Architectural Club's 2007 Chicago Prize competition, considering solutions for bridging Lake Shore Drive to the Chicago lakefront at Queen's Crossing east of Buckingham Fountain. An exhibition of the entries will be on display in the Louis Sullivan Trading Room off of Columbus Drive at the Art Institute of Chicago, followed by the announcement of the winners and keynote by Marion Weiss.

On Monday, January 22nd, the School of Architecture at the University of Illinois at 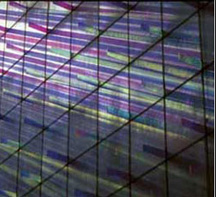 Chicago will host a lecture by James Carpenter of James Carpenter Design Associates, described as "a collaborative environment encouraging an interchange of ideas between architects, materials, structural engineers and fabricators. The studio has developed unique structural designs employing glass, steel and aluminum for a variety of projects, including curtain walls, floors, roofing systems, bridges, fountains and sculptures."

Also added, this Saturday, January 13th, Phillip Allsopp will lecture at Frank Lloyd Wright's relevance in the 21st century at the architect's Unity Temple in Oak Park, and on Friday, January 26th, at a fundraiser (tickets $25.00) for Glessner House Museum, Bill Tyre will give a presentation on the calendar presented to Frances Glesser on the occasion of her 58th birthday in 1906, which included contributions from Margaret and Daniel Burnham, Frederick Stock and hundreds of other prominent Chicagoans.

Do you know if Carpenter will be talking about the 108 North State project?