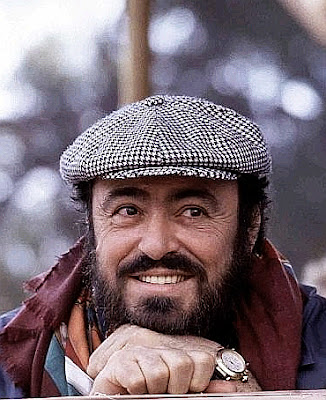 When I think of Luciano Pavarotti, I often remember the commercial he made, pre-superstar phase, for American Express, part of its legendary "Do you know me?" campaign. "When I sing Tosca," the ebullient tenor says to the camera, "they shout, 'Bravo! Bravo', but when I check into a hotel, they say, "Who? Who?" If you didn't know him, you immediately wanted to. His warm, engaging personality - which, along with an outsize talent, would soon make him one the most famous people on the face of the earth - leapt off the small screen.

Especially in his later years, it was fun to make fun of Pavarotti, of his massive, demobilizing girth, his constant cancellations, and his barnstorming Three Tenors stadium tours. Now he's gone, and all that melts away. There's only his many great recordings, and the memories of that pure, flawless voice and his timeless artistry.

As might be expected, OperaChic offers up a wonderful, wide-ranging tribute, bringing together comments from his colleagues, her own cogent explanation of his fabled diction, and several videos. See, and - most importantly - hear it all here.

On another troubling note, the New York Times is reporting that the great conductor Claudio Abbado, battling undisclosed health problems, has cancelled all upcoming concerts in the near future, including a return to Carnegie Hall next month.