September 17th deadline for shaking money out of the Graham - Why is their website so bad?

The Graham Foundation has sent out a reminder that September 17th is the deadline for individuals to submit an inquiry form for 2008 grant funding. This year, the Graham 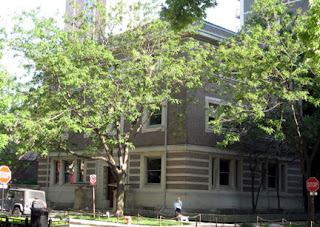 awarded seven grants to individuals and 13 to organizations (the inquiry deadline for organizations is February 28, 2008), totaling over $250,000. More information, including an on-line inquiry form, can be found on the Graham Foundation's website.

The foundation makes "project-based grants to individuals and organizations and produces public programs to foster the development and exchange of diverse and challenging ideas about architecture and its role in the arts, culture, and society." It makes its home in Schmidt and Garden's turn-of-the-century Madlener House.

With the 2006 appointment of new director Sarah Herda, the Graham appears to undergoing something of a retrenchment. Its last public lecture or exhibition was back in October of that year. The foundation's website has become spartan veering towards the inscrutable. The "programs" page has a single item, "H_edge - ARUP Advanced Geometry Unit/Cecil Balmond" for October, with no indication of whether it's an exhibition or lecture, or any further details.

It wasn't long ago that the Graham seemed to be getting the hang of the web, and was actually posting streaming videos of its lectures, making them more readily available to the public. On the evidence of its current web presence, however, it's backward march, full-force. The design is clumsy and unattractive, and the navigation is non-intuitive. (The home page is now the grants page.) Unless they're hidden in some secret nook, those videos seem to have entirely disappeared. One can understand if the Graham has decided to re-orient its priorities, but the current website is a misshapen embarrassment.

The Foundation's website isn't THAT bad. It's just a straightforward, no-nonsense, little JavaScript, few graphics website. It looks like there's a wealth of information there if you can handle the black & white approach.