Grace, Found in a Peat Bog, Turns her Back on Dirty Sexy Money 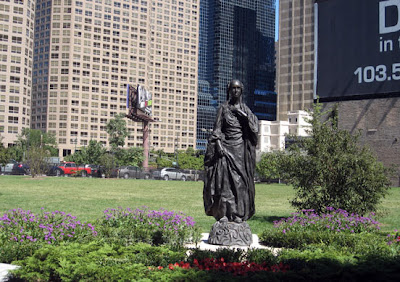 Last month, in Heritage Green Park, at Adams and Des Plaines just east of Old St. Pat's Church, there was a dedication of a new sculpture, Grainne, presented to Chicago by its sister city of Galway, Ireland. Chicago mayor Richard M. Daley joined with his Galway counterpart, Tom Costello, for the August 21st ceremony.

Irish sculptor Maurice Harron won a competition to create Grainne ("grace" in Gaelic), who symbolizes, in the words of the city's press release, "the traditional Gaelic society before it dramatically changed in the 1600’s and is inspired by an archeological finding of a young girl preserved in a peat bog. Pre-historic European sculptures of women were depicted with the left hand raised while those of men used the right hand, thought to be a gesture of blessing. The base of the sculpture is derived from the famous Turoe Stone, a Celtic pagan monument from County Galway, dating from the time of Christ. "

Heritage Green, reclaimed from a surface parking lot, was envisioned by the 2003 Chicago Central Area Plan as a major park for the new West Side, with tall trees and crisscrossed walkways. 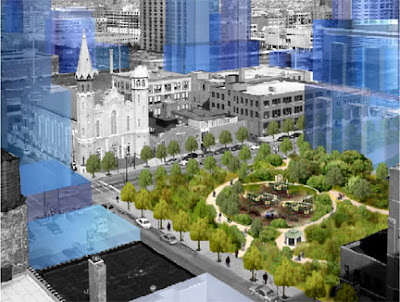 Currently, it's a simple sea of grass, a welcome emerald patch of respite amidst the overbuilt high-rise bog rising all around it. Grainne currently stands in the shadow of a huge elevated billboard advertising a news ABC series celebrating "the absurdly wealthy and powerful." Clearly, she's found the right place to shed her grace. 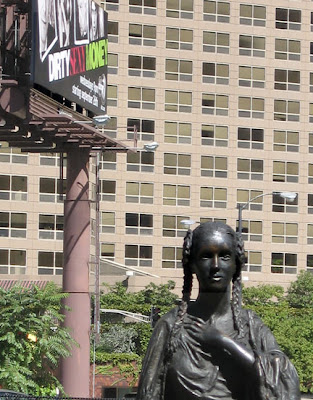 Postscript: And speaking of peat bogs, the National Geographic has this article, with a number of photos, on the work of Robert Clark in photographing the eerily preserved 2,000-year-old bodies (Mel Brooks not among them) found in European peat bogs. See it here.

...wanted to comment on another symbol recently published--the new Chicago Olympic symbol. To me it appears as a stylized marijuana leaf. Furthermore, it's plane ugly.

it's a shame they had to change it, (or foolish in not knowing that it wouldn't be allowed.) i wouldn't go so far as "stylized marijuana leaf" but it does leave a little to desired. Especially after the first logo that I really liked. In any event, it's certainly better then london's "saved by the bell" logo. my only question is, if we get the olympics, will we have another star on our flag?

the first one looked sophomoric and more akin to civic, chamber of commerce boosterism. the second, well,,,it's developed by the same company?

Somewhere out there, a group of fanatical Muslims will see Chicago's star logo and equate it to a cleverly designed Star of David. Other than that, I like the coloring and subtle high-rise effect.

Great commentary. I had no idea.