Forever Open, Clear and Free (except when it comes to me) 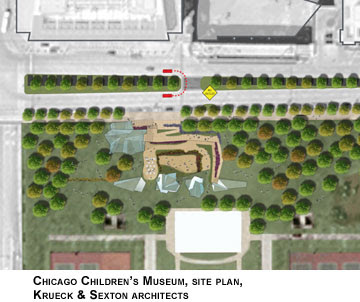 The Chicago Children's Museum wants to build a new 100,000-square-foot home in the same Grant Park where, a century ago, A. Montgomery Ward fought a long, bruising, and ultimately successful battle to enforce a 1836 mandate that Chicago’s lakefront public ground be kept “a common to remain forever open, clear and free of any buildings, or other obstruction whatever.” They're flexing their clout and reviving the playbook of the late Mayor Richard J. Daley's vaunted political machine to make sure nothing gets in their way, but community groups and open space activists aren't co-operating. Read a blow-by-blow account of the battle over the new building, complete with renderings and photos, here. 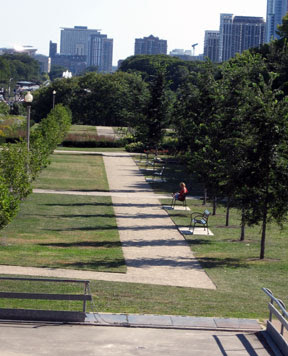 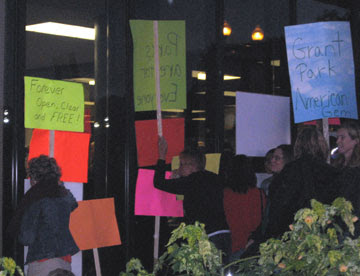 Why is there no mention of the required major renovation of Bi-Centennial Park? The entire park is required to be removed down to the concrete parking deck within the next 10 years... can the CPD afford to finance this AND continue to under-budget the entire park system?

Additionally, calling this section of GP a "haven" is ridiculous! I bike through this park on a daily basis (to my 60611 residence)and typically find drug users and the homeless hiding in the corners (I recommend my wife to never enter this area after dark)... and the 16 underused tennis courts with the view-blocking tarps? This park and it's use is in need for a change to an "Active park" not the stagnant, under-utilized area it has become... Chicago's "front lawn" is progressing into Chicago's "Playground". The residences that live on Randolph are having a difficult time understanding this, and are subsequently losing many battles.

What you're describing is Grant Park east of the tracks before Millennium Park, and believe me, Daley Bicentennial Park is nothing like that. I was out there yesterday. No drug dealers, no drunks sleeping on benches. Just a person reading in the sunlight. A family with a small child on a tricycle. Another family with a kid in the stroller, dog by their side. Riders on a segway tour. I agree with you about the tennis courts, though. I can't quite figure out why they're so unterutilized.

The big money boys are pushing the idea that if it's not as hyperactive as a trip on LSD, it's stagnant. Sorry, no. It's the contrast to that kind of thinking that makes Daley Bicentennial Park, with all of its current flaws, a haven.

If all we want of Grant Park is to turn it into a theme park "playground", why not turn it over to Six Flags - or, better yet, Bally's Casino's - and be done with it.

The leaseholders on the garage will be paying for the repairs. Money (from the lease) was set aside by CPD for the restoration of the topside.

Lynn and I must be looking at different things in Bicentennial Park, or we are seeing what we want to see... but I typically do find that most of the homeless that live in the lower decks just north of the park find refuge in this exact location... which is why I pay close attention when traveling through.

The whole case for leaving this doomed patch of land alone and simply renovating it is not realistic. What then of those plans? What are the chances that the local residents will find something wrong with them as well. And to argue that this is a haven for the VERY few that use it is not realistic either. The tennis courts are a symbol of Bicentennial Park, that no one is really interested in it except for the local residents that don't use it anyway. My friends that live on Randolph who are over 70 years of age argue that they don't want children so close. Other concerned residents I "discussed" this issue with last Monday really didn't have a constructive argument, just a forcefully direct opinion (and accusations that everyone for the CCM, including myself, is childless and from the suburbs).
A logical progression of this site is to utilize it to the fullest, whether there are "big money boys" involved or not. And comparisons to Six Flags are simply a blatant exaggeration. This is a 25 year old institution that is 100% directed towards the teaching and interest of children... which seems to be the least focus of this debate.

I think we agree that without detailed plans for the CCM's construction, it is impossible to determine the impact on the land and the views. Until then I believe that we are blowing a lot of air, as many did last Monday. What the Windy City is best at!

No point in discussing this now. After reading the Sun-Times today, it looks like this is going to happen, whether you like it or not.

For me it is just difficult to understand why the local residents believe that they are victims here... do they really believe that this is an encroachment on their way of life, their neighborhood? The buildings on E. Randolph that have enjoyed over 20 years of independent serenity have slowly grown to be a part of Chicago and not isolated on their own island.

My personal belief, after face to face discussions with my neighbors and the residents of the buildings along or near to E. Randolph, is that the tranquility that the locals have enjoyed for so long is fading away, and might possibly never return. Inevitable as it is, the residents are fighting their mightiest to circumvent having random strangers walking in front of their building or, God forbid, entering their lobby to use the restroom.

Although detailed plans have not been distributed, is has been communicated that the project will be constructed underground and a bulk of the circulation of CCM visitors will be underground as well. The footprint of the CCM will be less, if not similar to the existing Bicentennial Fieldhouse.

My suggestion to the “victims” of the new Grant Park… time to move away and find another quiet retreat, like the suburbs… and allow the many of families that would enjoy the chance to live adjacent to this new and vibrant park. If only most people could afford such an opportunity.

So aia, what racial overtones is the CCM and Pritzker going to cook up now? If the educational learning's from CCM is that, when faced with an unpopular decision, throw in the race card, my children may do better to play & learn elsewhere.

You betray your hyprocrisy in your statements. The only ground you have to stand on is the "open, free and clear" and NOT the over utilization of our parks (rasicm? no, elitism, yes).

Now, please tell me how the universally acclaimed Millenium Park with the Harris Theater concrete entrance pavilion and huge flyloft does not already set a precedence? So, CCM is NOT setting a precedence.

Finally, please name one significant urban park in the world that does not contain significant cultural institutions? Guess what? There isn't one and none of these I believe is in danger of being paved over as your fear-mongering within this blog (to increase hits?) is implying will be the inevitable result of replacing a deceprit undergourn fieldhouse with an undergroun children's museum.

Oh, and by the way, museums, like department stores, generally avoid windows in order to control and maximize the exhibit space.

This park and it's use is in need for a change to an "Active park" not the stagnant, under-utilized area it has become... Chicago's "front lawn" is progressing into Chicago's "Playground". http://adderall-drug.blogspot.com

Usually I agree with Lynn Becker, but his attitude about the CCM feels unfair and unbalanced. The issue of keeping Grant Park free and open is valid. Whether the CCM violates that precept is a matter for discussion. However, in other regards, this is the perfect location for the CCM and the kids of Chicago. Further, the museum has free times for people, and would be much more accessible in this location than almost any other. Right now, the area is very under-utilized, and his talk of it being heavily used is not accurate. I have gone through the area frequently as well, and it is an ignored segment of Grant Park around the Daley Center and to the east to LSD. Indeed, the further east one goes, the more it becomes a haven for the homeless due to its minimal use.