Tigerman, Wimer, Kerwin and the 2016 Olympics - late additions to the September calendar

This Monday at 6 P.M., you can hear Stanley Tigerman, whose new building for the Pacific Garden Mission is set to debut next month, give a lecture at School of Architecture at the University of Illinois at Chicago, where at the same time two weeks later, Skidmore, Owings and Merrill's Ross Wimer will also lecture. And if you're lucky, you may still 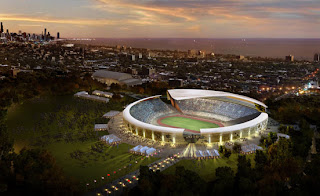 may be able to get a reservation for this Tuesday's dinner talk for the Structural Engineers Association of Illinois by SOM's Tom Kerwin, on the topic of planning for the proposed 2016 Chicago summer Olympics.

And don't forget that this coming Saturday, September 15th, you'll have a rare chance to tour Gordon Bunshaft's Building 42, Hostess House, at the Great Lakes Naval Training Center, one of 25 finalists in the American Express Partners in Preservation competition, which pits landmarks against each other in quest of funding dollars.

These events are among nearly 40 individual items on the September calendar. Check them all out here.