No Escape(s) for The Palmer House

Roving correspondant and habitual shutterbug, engineer Bob Johnson, gives us these shots of the continuing restoration of the facades of Holabird and Roche's 1925 Palmer House, in this case of the removal of the first of three massive fire escapes and screens, re-establishing the continuity of the facade's long row of tall window groupings. Here's hoping they also restore the original window frame design and pediment of the newly re-exposed center window sets, as well.

Last year, Preservation Chicago led a successful charge to block concessions made by a typically pliant Commission on Chicago Landmarks, during landmarking negotiations for the building, that would have allowed developer Thor Equities to destroy the original limestone facade on the first two stories and replace it with a decidedly non-contributing steel and glass "modernization." The Commission's lack of backbone still failed to protect the hotel's great block-long arcade, whose width is being decimated in an effort to increase ground floor space, an economically suspect strategy since most of it will be deep within the building's interior. 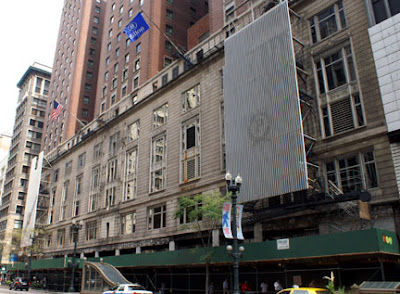 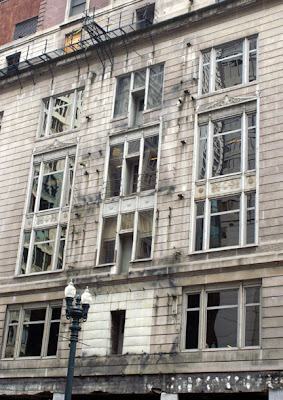